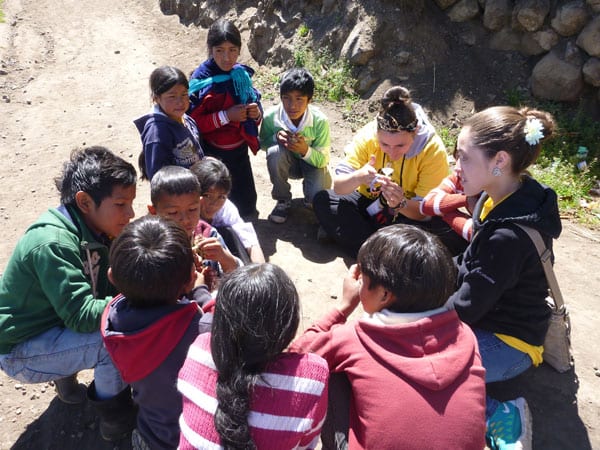 Photo by Holly Tockstein
Danielle Carmody (second from right) works with Ecuadorian children on a bracelet craft during a mission trip.

Two adult youth ministry volunteers and four young adults from CTGS traveled with 21 other Michigan volunteers to Rio Bamba July 20 to 30 to work at three nearby Andean villages fixing church roofs, painting a school, and clearing trash and weeds while working side by side with villagers.

Danielle Carmody, 18, of Lincoln Park said she knew she was where she should be when Ecuadorian villagers appeared en masse to work by their side when the Michigan volunteers started moving stones by hand to strengthen a foundation.

“It was amazing. They just jumped in,” she said. “I didn’t know any Spanish, they didn’t really know English, but we were able to communicate and we got it done together, and that is when I knew that we were in solidarity. We were together and I knew this is what I was meant to do.”

She said she was sad when it was time to leave Ecuador.

“As much as I missed my family and my church and the food here a little bit, I didn’t want to leave the people of Ecuador,” Carmody said. “They were so loving and so caring and they made you feel so welcome and they were so happy that we were there. They were always saying ‘thank you,’ but it was really like we should say thank you, because they really opened up my eyes. It was an experience of a lifetime.”

Lilly Hill, 18, of Lincoln Park said she also found the experience changed her perspective, and she would encourage others to go on a mission trip.

“Once you are actually there in the moment you will definitely have your eyes wide open,” she said. “You would see everything perfectly clear. It is amazing.”

She said she had two years of high school Spanish, so she understood some of what the Ecuadorians were saying, and smiles provided a means of communication as well.

She said in addition to roofing, painting, weeding and trash detail, they taught and played with children and helped with gardening.

Hill said they worked with the local people on the projects, not in isolation from them. She also appreciated the Ecuadorians’ sense of community.

“Everyone there is in such great community,” Hill said. “Everyone connects. (They) don’t have, like, cell phones and such. I do appreciate what we have here, but living there would probably be a privilege.”

Holly Tockstein, the youth ministry coordinator at CTGS has taken teens on mission trips to Kentucky in the past, but this is the first time she has taken a group to another country.

Joyce Francois of the Archdiocese of Detroit has taken groups to Ecuador for seven years, an effort begun originally through Catholic Relief Services, the international humanitarian agency of Catholics in the United States.

“When she saw the poverty of the people and the need of the people that were living out there, she said that she was going to come back, and I am going to bring people back,” Tockstein said. “The coordinators that we worked with out in Ecuador said we are the only group that keeps coming back.”

“This trip was one of the most awe-inspiring, humbling, amazing experiences of my entire life,” she said. “The people there are poor, but they were so kind and their spirit of community was amazing to me and the area itself, the mountains, the country is amazingly beautiful.”

She said when she was flying home she saw Miami from the air and was aback by the excess she saw. She said she knew right then that Americans have too much.

“I definitely feel I have to change my life by being and doing things more simply,” she said. “I am not exactly sure how that all is going to happen yet, but it definitely changed me spiritually and things in my life materialistically and things like that I feel I need to change because you really see we don’t need all of these things that we have.

She said the Ecuadorian sense of community extended to the mission trip group working with them, not for them out of charity.

“All the jobs that we did, the (Ecuadorians) were right there next to us,” she said. “We had one project (where) we were hauling huge rocks in assembly lines to help them with the foundation for a classroom. There were two women, who were probably in their 70s next to me, and they were hauling big rocks. They are in it just like we are. That was amazing to me.”

She said it was almost surreal, being in the Andes Mountains and working with the local people.

“I really wish everybody could do something like this,” she said, “to meet and see how other people live, see how the world is different.

“It is not just our little world that we have here. People live differently and it is wonderful to reach out to other people and to help people.

“It would change everybody’s lives and it would help us to realize that the reason we are here is to help other people. We are not all called to go off on a mission trip, but it helps us put life in perspective.”

Aaron Tockstein, Holly’s husband, who also went on the trip, urged others not to be afraid to go to another country on a mission trip.

“Don’t be afraid of expanding yourself and going out and doing something that maybe it is a little scary for you,” he said. “We had a lot of kids who were afraid of the food they were going to have. But they still ate every single day, and at the end of it they were very happy to have tried lots of different foods.

“A lot of our kids really didn’t speak Spanish, yet by the end (they were) eager to learn the language, what little they could in the time to communicate with people.

“Don’t be afraid of new experiences and enjoy them as best you can.”