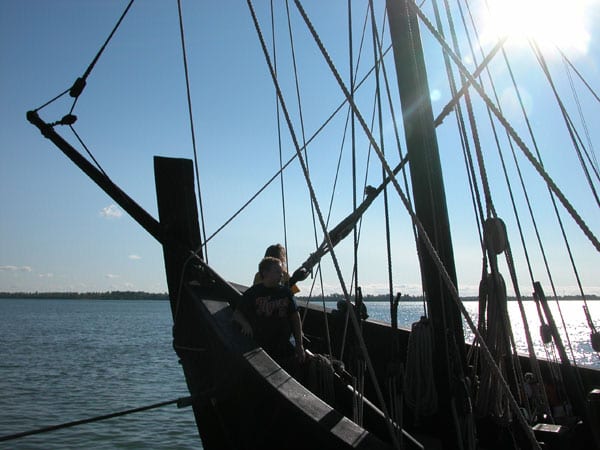 Photo by Tereasa Nims
Josh Prim (front) and sister Kayla Prim, enjoy a view from the bow of the replica Nina docked at Bishop Park Thursday.

By TEREASA NIMS
Sunday Times Newspapers
WYANDOTTE — History teacher Dave Zenk taught for many years and said, “There is no better classroom than this ship I have right there,” referring to the Nina.

The 65-foot Nina and 85-foot Pinta replicas docked at Bishop Park last Tuesday and set will sail Tuesday. Zenk is the Nina’s senior crew member who sails with five to six other members.

The exhibit is part of British Virgin Islands-based The Columbus Foundation’s “sailing museum.”

“They are living history,” Zenk said.

Sometimes one of the things people notice is their size, he said.

“People are always amazed at the size, just how small (the ships) were,” Zenk said.

Ginny Haskell, from Pensilvania, who was vacationing in Dearborn and heard about the ships, echoed Zenk.

“We have toured other ships and it is really, really amazing how small they are,” Haskell said.

Zenk said after touring the boats, they wonder how Columbus did it with 24 crew members. The real Nina reportedly cradled 120 passengers in 1496, to survive a hurricane.

“It’s a part of history,” Curylo said. “It’s something all kids should get to see and enjoy.”

Curylo said looking out at the water from the ship, “you can just imagine sailing.”

Jason Prim of Riverview heard about the replica boats Wednesday evening and planned a surprise trip for his children on Thursday morning. He didn’t tell Josh, 12 and Kayla, 10, where they were going and didn’t realize what was going on until they got to Bishop Park.

“They thought it was awesome,” Prim said. “It was their first time seeing something like this.”

Both Josh and Kayla said the trip was “pretty cool.”

Mary and Maurice Smith of Allen Park were excited to see the ships again.

“All built by hand and they represent history,” Maurice Smith said.

Many asked why there isn’t a Santa Maria. Crew members said there won’t be one because a replica wouldn’t navigate the waterways of the other two ships, Columbus didn’t like the ship because it was slow and clumsy and the ship never made it back to Europe.

To learn more about the Columbus Foundation, go to www.thenina.com.