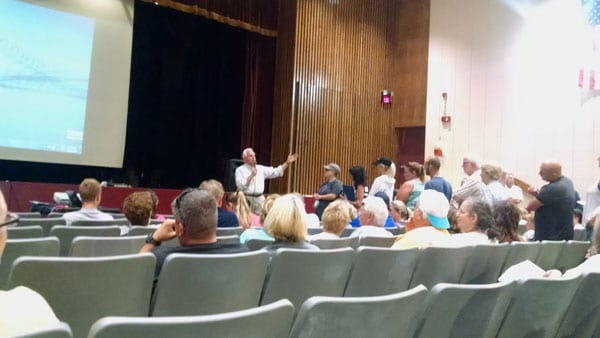 By JAMES MITCHELL
Sunday Times Newspapers
SOUTHGATE — It took less than an hour to create problems that Mayor Joseph Kuspa said may take weeks if not months to address. Kuspa twice addressed a packed auditorium last week as city officials scrambled for answers.

“We had months worth of rain in 45 minutes,” Kuspa said. “There really isn’t an easy fix.”

Lengthy public meetings were held Tuesday at Anderson High School in the wake of the Aug. 11 storm that left many basements flooded and homeowners with more questions than answers.

Officials from the city, county and Homeland Security were on hand to review a weather event that had “less than 1 percent” chance of happening, City Engineer John Hennessey said.

“It was essentially a flash flood,” Hennessey said. Southgate was hit with more than 4.5 inches of rain during the storm, and the city’s sanitary sewer system was overtaxed.

“The system doesn’t have the ability to exceed capacity,” Hennessey said, and the amount of water that rushed over the streets was more than the drains could handle.

The good news was that the city’s drinking water was not affected, and there were only a limited number of reports of structural damage to houses or businesses, but that was little consolation to homeowners who learned that damaged property that had been in basements — not considered “living areas,” according to insurance policies — were not covered.

Typically, financial relief from city, state or federal resources is offered only in cases where structural damage occurred. However, city officials hope to bring assistance to residents if possible, and encouraged homeowners to report damaged properties — including monetary value — to City Hall. Residents are asked to provide photographs of physical damage done to walls, floors or homes via the city’s website at www.southgatemi.org or at City Hall, 14400 Dix-Toledo.

Kuspa said city officials last week provided information that had been received to the Federal Emergency Management Administration, and joined Wayne County officials in asking the federal government to officially declare an emergency situation, a necessary step before any compensation may be offered or funds available. County officials have scheduled an early September meeting with Gov. Rick Snyder — who visited Downriver in the wake of the storm — to review assistance options.

Also available from the city is a basement flooding information packet, and on Thursday Kuspa and city officials welcomed residents in critical need at the Brainard Senior Center.

Only certain sections of the city were affected. Kuspa explained that the sewer system was overwhelmed, not broken, and that the older residential areas east of Dix-Toledo is serviced by the same sewers as Wyandotte. The amount of rain in such a short time — a “100-year storm” as it was defined — simply overtaxed the system, which had been upgraded following a storm in 2000 that resulted in similar flooding.

Kuspa and City Administrator Brandon Fournier said the city itself had neither the funds nor the method for providing relief, but that officials had been working around the clock with neighboring and outside agencies to assist residents.

“We’re focused on identifying resources and getting external help,” Kuspa said. “This was a traumatic experience. A regional natural disaster and we’re trying to deal with it the best we can.”