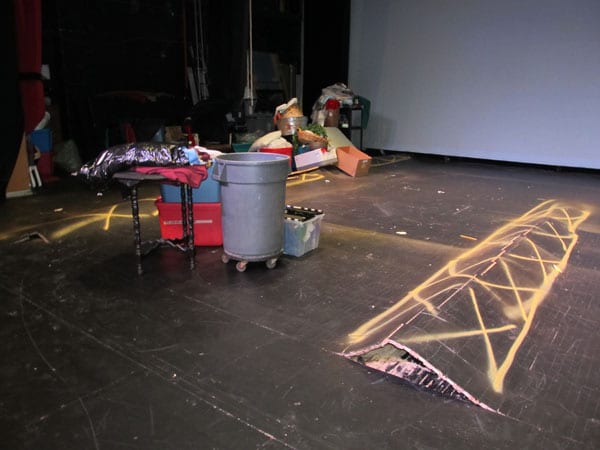 By SUE SUCHYTA
The theater departments at Edsel Ford and Divine Child high schools in Dearborn suffered damage from the Aug. 11 torrential downpour that dropped five inches of rain on the area in several hours.

Robert Doyle, director of choral activities and theater at Edsel Ford, said Wednesday that there is damage, but the extent has not yet been determined.

“Many of our set pieces and props were affected,” Doyle said. “We will be working to salvage as much as we are able.”

Divine Child suffered heavy damage as the stage buckled, the orchestra pit was flooded, and many costumes and prop pieces were water damaged and unsalvageable.

Elisa Noeske, drama and musical director, said she was running her children’s summer musical theater camp when, shortly before 4 p.m. Aug. 11 a girl told her there was water on the stage where the children were dancing.

She said staff initially thought they would place garbage cans to catch water leakage from the roof, but they soon realized that water was coming from beneath the stage.

“It was virtually impossible to tell where it was coming from,” Noeske said. “Before I actually opened up the downstage costume room door, you could see some water trickling out from under there. When I opened the door, it was just a stream of water. It looked like one of those scenes out of the movies.”

Noeske said the costume storage rooms adjacent to the stage once had sinks and bathroom plumbing connections. She said that costume room wall removal may discover if any plumbing connections were improperly sealed or if a much more serious problem exists.

She said clearing all props, costumes and set pieces from the stage area is the first step for damage assessment and repair.

She said several trash bin loads of sewage-covered costumes are gone. They are not sure what damage insurance will cover, but she said it will not replace costumes that have been accumulated since the 1960s, when the theater program began.

Noeske said she has heard no timeline for the stage repairs, and does not know yet how it will affect the fall play, “Pride and Prejudice.”

“The plan is definitely to have a play,” Noeske said. “I have a lot of seniors this year. This year is my fourth year here, so the kids who were freshmen when I started, it’s a special year because they were kind of my babies, my first class when I was getting going.”

She said she knows they would be devastated if they could not do a show, but at this point she does not know when they will be able to perform on the stage again.

“We won’t be rehearsing here for a while,” Noeske said. “But it is too early to say if the stage is going to be in shape by Nov. 13, which is when we had slated our opening night.”

An architect assessed the project for the first time Wednesday, Noeske said.
“It’s going to be a major job for us,” Noeske said. “(The architect) just doesn’t know until he gets into it how big of a job it is going to be.

She said she does not want costume or prop donations for the fall show until she knows there is a storage spot for them that would be free from all harm.

She said a “GoFundMe” account might be created online, and discussions have been ongoing regarding fundraisers. She said many events aside from theater take place in the auditorium.

“Luckily we have a lot of support from the administration and from the church,” Noeske said. “They want us to perform.”