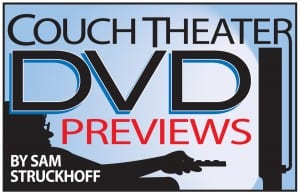 “Guardians of the Galaxy” (PG-13) —  Peter Quill (Chris Pratt) —  or “Starlord,” as he tries to get people to call him —  is an aspiring space bandit who stumbles into possession of the All Powerful Space Gem. Well, it turns out that a merciless alien warlord really needs that space gem for his space genocide. The Galaxy’s best hope lies in Starlord and his reluctant allies: an ill-tempered raccoon-hybrid (Bradley Cooper), a green assassin lady (Zoe Saldana), a rampaging alien who doesn’t get figurative language (Dave Bautista, also known for pro wrestling and MMA) and a talking tree guy (Vin Diesel).

It’s everything you want from the Marvel super-summer movie, with enough of a twist so it doesn’t feel like a recolored Avengers. If you missed it on the big screen, it’s still well-worth picking up before the inevitable sequel.

“Dolphin Tale 2” (PG) —  In the last movie, a dolphin named Winter received a second chance thanks to a prosthetic tail fin and a group of dedicated humans. This time around, Winter loses her tank mate, and it’s up to a pair of teenagers (Cozi Zuehlsdorff and Nathan Gamble) to care for Winter and help find her a new companion. There’s some human-based drama, too, but the real draw lies in the sea creatures, the struggles to care for them in the right way, and the aquatic photography.

Some critics have panned it as a little too saccharine-sweet. It’s certainly sentimental, but there is drama enough to entertain without stealing too much screen time from the pretty animals. This is a feel-good flick that families and aspiring biologists can enjoy together.

“When the Game Stands Tall” (PG) —  The De La Salle Spartans high-school football team had an unbelievable winning streak of 151 games under the leadership of coach Bob Ladouceur (Jim Caviezel). Then in 2003, out of nowhere, they started losing. A series of off-the-field tragedies coincide with the losing streak, making it even more important for coach to get everyone’s spirits back up. While the football scenes are intense and engaging, the stuff before kickoff and in the locker-room just doesn’t have the tension.

“Frank” (R) —  An eccentric and inspiring musician spends his life wearing a cartoony paper-mache head and writing music in a notation system that he invented himself. By Frank’s side are his soul-mate (Maggie Gyllenhaal) and a somewhat bewildered young drummer (Domhnall Gleeson). This oddball semi-adventure follows a brilliant-yet-bizarre frontman whose character is drawn from several real-life rockers with complicated or unique personas. Oddest of all was the decision to cast Michael Fassbender in a role that hides his face for the duration. If you’ve got an urge for a flick with some spunk and a skewed perspective, give Frank a chance to weird you out in a good way.