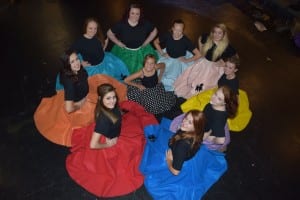 A musical dream season, with classics like “Camelot” and “Beauty and the Beast,” and relative newcomers like “The Addams Family” offer enticing upcoming entertainment at the Downriver Actors Guild’s Catherine A. Daly Theatre on the Avenue, 2656 Biddle in Wyandotte.

The theater will be busy, with a five-show season, featuring four musicals and a comedic stage play, as well as two youth theater productions, two fundraiser concerts, an edgy adult musical, and a dinner theater at Biddle Hall.

DAG vice president and marketing director Stephanie Primeau said the season has shows that will appeal to everyone.

She said DAG continues to strategically choose shows to appeal to different audiences and auditioning talent, and last season the board was pleased to see new faces onstage and in the audience.

“One of my biggest rewards is seeing how we impact people, through the enjoyment of watching a show or being on stage,” Primeau said. “The feeling is beyond words.”

DAG president Joel Bias said that while the members who run the group are close-knit and work together well as a team, they welcome newcomers.

“We continue to bring in new directors and staff to keep that fresh and ready to go,” Bias said. “I believe in the group. I believe in what we are doing, and I believe that it is a family, and we’ve made a lot of close bonds through this.”

Directed by Valerie Haas, the show follows Wednesday Addams when she falls in love with a “normal” young man and must introduce his family to hers. When her love life seems doomed, Fester and the ancestral ghosts step in to help out.

Auditions for the Disney musical “Beauty and the Beast” will be Aug. 23 and 24 in the evening at the playhouse, with performances Dec. 4 to 6 and 11 to 13.

Directed by Debbie Aue, the story of Belle and the spell-cursed Beast is a classic love story of learning the meaning of love and sacrifice.

Wendy Fichter is the music and vocal director, with Jane Beier as choreographer.

The musical “Dr. Dolittle” will warm audiences Feb. 12 to 14 and 19 to 21 with the story of a kind but eccentric man from a small English village who can talk to animals.

Set in the 1970s before same-sex marriages, two out-of-work male musicians, Jon and Leslie, roommates in New York City, having been filing their taxes as a married couple to save money. However, when the IRS targets them for an audit, Leslie, with the help of Jon’s financee, Kate, must masquerade as a wife.

Complications ensue when Leslie and Kate have an affair, Jon’s mother wants to meet his financee, and Leslie’s ex-girlfriend wants to know why he won’t see her anymore.

The Lerner and Lowe musical “Camelot” closes the regular season, with performances May 6 to 8 and 13 to 15.

Directed by Peter Sonnberg Schmidt, the story follows King Arthur, Guinevere, and the Knights of the Round Table amid the pageantry and idealism of Camelot, set to a lush score.

In addition to the regular season shows, DAG has seven additional shows, billed as fundraisers, on the calendar.

When six laid-off steelworkers try to raise some much-needed money by taking it all off, they restore their self-esteem and build lasting friendships.

The dinner and show package is $28, with a cash bar. The show contains adult content.

The youth theater productions, performed by children for audiences of all ages, presents “School House Rock Live Jr.” Nov. 13 to 15, and Disney’s “Sleeping Beauty Kids” June 3 to 5 and 10 to 12.

Directed by Lucinda Chavez, tickets are $16 for adults, and $13 for seniors and students.