Novak, 33, finished third at SCCA national championship run-offs in September at Daytona International Speedway in Florida, running formula Atlantic, the top-tier in SCCA amateur racing, and a major series, driving for his own team, Brian Novak Racing, which he runs with his father.
Novak said his father began racing SCCA and other series in 1969, and motorsports were central to his childhood.

“As I was growing up, that is the only thing I cared about,” Novak said. “I’ve loved racing my entire life.”

He crewed for his father until he was 17, when his father stopped racing and let him drive the open wheel formula race cars.

Novak has raced for the past 16 years, and has won three SCCA national championships, and been on the podium two other times, with about 40 other wins, and multiple track records.

“We have actually been quite successful, and most of it has been done in cars designed and built by myself and my father,” Novak said.

His father, a retired Ford engineer, runs a car construction business with Team Novak on the side for competitive cars and street kit cars, automobiles available as a set of parts from a manufacturer which must be assembled in a working car.

Novak, who attended Lindbergh Elementary, Bryant Middle, and Dearborn High schools, earned a bachelor’s degree in Mechanical Engineering at the University of Michigan-Dearborn.

“I’m as Dearborn as you can possibly get,” he said.

Novak said it is a huge advantage to be a mechanical engineer.

“I can easily convey what’s wrong with the car to my father or my crew chief, and what needs to be fixed on the car,” Novak said. “I can troubleshoot.
“I am not just a feedback machine that does nothing but say what the car is doing. I can then go and re-engineer the car around a new tire or a new powertrain package.”

Novak said his driving and engineering experience accelerates the development process for a racing vehicle. 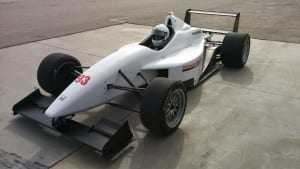 “I am lucky to have somebody as dedicated as my father, Jay Novak. When I don’t have the time due to my career, he’s working on the car,” Novak said. “He spends a lot of time designing new parts and coming up with things. He’s a huge part of (me) being able to balance both.”

He said being an engineer and racing can be very time-consuming.

“You work all week long, and then you get right out of work and you drive down to the race track,” Novak said. “You work all weekend, you’re at the track, and you are probably working harder than at your actual job.”

He said sometimes he will get home from a weekend of racing at 1 or 2 a.m. on a Monday morning, catch some sleep and still go to work that day.
He said Ford, where he has worked since 2011, values employees who have a passion for cars. He worked in vehicle dynamics at the test track until Thursday, when he started working for Ford Performance, where he will be using his racing acumen more directly working on their rally program.
In addition to having a passion for cars, he said he is an adrenaline junkie.

“I think it is the competition aspect that I really enjoy,” Novak said, “and then winning is just second to none for any feeling in life.”

He said it’s an even greater feeling to win in a car designed by his father, that he worked on.

“You can go cut a check and go drive for a race team,” he said. “In my case, it’s my own car, designed by my father and myself, that we are working on all the time.”
Novak said aspiring race car drivers should know that the sport is very expensive and time-consuming, and you have to be willing to put in the time and effort to learn how to drive.

He said when he started racing, training was physical, but now computer simulation training is very sophisticated.

“The level of racing games have escalated so far on home computers now to the point where they are almost simulation grade,” Novak said. “Other than the seats not moving, and you’re not getting that feedback out of the car, they are very high level.

“A program like iRacing anybody can download. You just have to buy a steering wheel for your computer. It is very high level training.”

Novak said racing is endurance-based, and a lot of professional drivers are triathletes, and are small and light.

He said drivers need to be in good cardiovascular shape because cars get very hot during races, and they experience strong G-forces during cornering.
“You have to be super physically fit to be able to think clearly,” Novak said. “The more tired you are, the less clear you think, and you end up making a mistake.”

Novak said on public roadways he is more aware of other drivers because of his highly developed instincts.

“You have a very good understanding of the limits of the car, what you can do on the road, and what’s safe,” Novak said. “You instinctively know where you are going to go.

“Every time I have been in a situation, you end up making some movement that gets you out of it. It’s kind of a sixth sense thing, because in a race car, it happens so fast sometimes that decision making can’t happen. You just have to do it.”

For more information, go to briannovakracing.com.