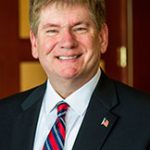 Wayne County, which was recently released from a consent agreement with the state, must now tackle other challenges, which include funding pension liabilities, and operating within a budget that saw a 30 percent drop, to 2008 levels, due to declining property values.

Palamara, an attorney, served Downriver in the state House of Representatives from 1984 to 1991, and was elected to the County Commission in 1998. He chairs the Ways and Means Committee, and is on the Economic Development and the Government Operations committees.

His commissioner profile is at waynecounty.com/commission/district15.htm.

With the county’s financial situation improved, Palamara wants the focus to shift to public safety while staying within budgetary constraints. He sees public health and Meals on Wheels as priority services.

O’Connell, an insurance representative, serves on the Ecorse City Planning Commission Board. His website is patrickdoconnell.com.

Crime and drug use are issues O’Connell feels are a priority, and he wants to see money allocated to deterrent programs. He would seek out successful drug rehabilitation programs elsewhere to see what would work here.

The 13th District — Dearborn and Allen Park — is represented by commission chair Gary Woronchak, a Democrat, who is running unopposed.

The 4th District — Lincoln Park, Melvindale and part of Detroit — is represented by Ilona Varga, a Democrat, who also is unopposed.