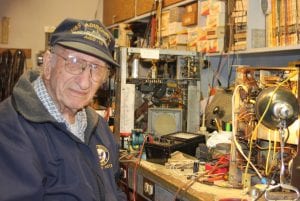 DOWNRIVER – With Dec. 7 marking the 75th anniversary of the Japanese attack on Pearl Harbor, it serves as a reminder that surviving World War II veterans, and their memories, become scarcer each year. 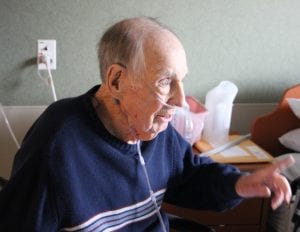 Paul Colosimo, 99, of Melvindale, entered the Navy in 1943, and served in World War II on the Naval Command Ship USS Adirondack (AGC-15), a floating command post with advanced communications equipment.

He still puts his skills to use today, repairing vintage radios in his business, Paul’s Radio and Television Repair Shop, 18573 Allen Road in Melvindale. He started the business in 1949 in another Melvindale location, and built his current building in 1954.

He said his three brothers, Charlie, Frank and Eugene, served in the Army during World War II, and they also survived the war.

Colosimo said if the war in Japan hadn’t ended with the atomic bombs dropped on Hiroshima and Nagasaki, the ground war would have gone on for years.

“We would have been fighting for a while,” he said. “It made us friends by annihilating two cities. They signed aboard the ship Missouri, and that finished it.”

He said he was in the Army Signal Corp as a civilian before he was inducted into the Navy.

“A deal come along called ship repair,” he said. “They kept writing me, and I kept looking at it, and I’d ditch it. Finally they said they would report me to the draft board for not answering their letters.”

He said the next thing he knew, he had passed the physical, and was in the Navy. He was sent to the Farragut, Idaho, Naval Training Center, at the time the second largest Naval training center — with the Naval Center at Great Lakes near Chicago being the largest — for basic training.

He said his job was to keep the radar, the sonar and the radio operating properly.

“I think I had the easiest job of everybody in the family,” he said. “I didn’t shoot anybody. I made sure the equipment worked. That was my job.”
They headed for the Pacific, but when the war ended they headed to Norfolk, Va., and he and 90 other men headed to the Great Lakes Training Center in Chicago for discharge.

Colosimo was married to his wife, Kathryn “Kay,” before he entered the service, and their daughter Marilyn was born in 1944. Their daughter Rosemary was born in 1946, and son James in 1951. He and Kay were married for 68 years when she died in February 2012.

Leonard Robinson, 97, of Riverview, served in the Navy during World War II, joining in 1943.

He said he first heard about Pearl Harbor on his car radio when he was driving home from Port Huron.
“Like everybody else, I was a little bit surprised, disappointed and angry,” he said.

He said he knew the United States would be drawn into World War II, but he didn’t think it would happen that way.

In the Navy, he served on LSM 394 – a “landing ship, medium” — also known as an amphibious assault ship. He said it was 205 feet long and 35 feet wide. They carried tanks and cranes.

“We covered the Pacific, from where it was built in Charleston, to Japan,” he said. “It took three typhoons. It was the most dismal-looking ship you ever saw, but probably the most seaworthy ship you were ever on.”

Robinson was married while he was in college, and when he graduated, he was drafted in the military.

“I went from Notre Dame to Cornell to the South Pacific,” he said.

He said he served as an engineer’s officer on the ship, and said the weather – the typhoons – were their worst enemy.

Robinson said the young men who were thrown into wartime were extremely competent in their positions.

He said he was very lucky that the war in Japan ended when it did, because his ship would have been part of the invasion forces.

“The casualty rates were estimated to be 85 percent on both sides,” he said. “It would have been a blood bath.”

He was a lieutenant when he was discharged. He said he turned down a command position when the war ended because he wanted to return to civilian life, and see his oldest son, who was about 4 years old by then.

He said he didn’t re-enlist for the Korean War because he was raising his family and didn’t want to leave them.

He and his late wife, June, who died 15 years ago, were married 66 years, and they had two sons, Lowell and Gary.

He said today’s military fights a different kind of war.

“We have guerrilla warfare now,” Robinson said, “which is an entirely nasty war.”

Emil Berensten, 98, of Riverview, served in the Merchant Marine, which serves as an auxiliary to the Navy during wartime, delivering personnel and material for the military.
He was in the Merchant Marine for 15 years, during peacetime and war, joining in 1939, about two years before theUnited States entered World War II on the side of the Allied Forces. He said the Merchant Marine took him all over the world.
Berensten said he was at sea eating breakfast when he heard about Pearl Harbor. He subsequently served in the signal corp, and as a steward.
“You got to do the best that you can,” he said.
Once they were at war, he said you couldn’t go out on the deck at night to light a cigarette, because the light could be seen by enemy submarines.
Berensten said it was so long ago, he has forgotten many things, but memories will come back when someone starts talking about them.