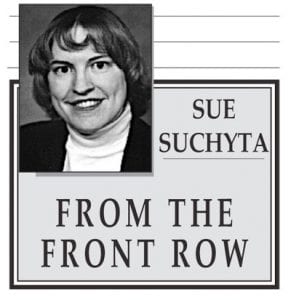 Bullying – from the perspective of the victim, the bully and the bystander – is the three-pronged focus of the Jewish Ensemble Theatre’s production of “Word,” a traveling professional show aimed at teaching middle and high school students about how to react to and prevent bullying they encounter, with the focus on the importance of bystanders speaking up when they witness bullying behavior.

Salina Middle School students in Dearborn had an opportunity to watch the production and participate in a talk-back session with the cast last week.

“Live theater is spell-binding,” Bruce said. “It captures the attention of students in a way that no other medium can. It is impossible not to be drawn in.”

Principal Jamel Lawera said it is important for students to see the anti-bullying message visually as the actors present it to them, and for them to be able to ask questions afterward.

“We have bully-free zone banners in the building, and the district does a good job of doing a once-a-year, response-building show,” he said. “We have a lot of different resources in place here to help students.”

He said the school’s anti-bullying education has reduced suspensions and referrals in the past year.

The Players Guild of Dearborn announced the cast of James Goldman’s “The Lion in Winter,” the fourth show of the group’s 89th season last week.

Set in England in 1183, King Henry II plans to announce his son John as his successor, while his estranged wife, Eleanor of Aquitaine, wants Richard to be the next King. As the royals gather for Christmas, each schemes to get the King to make his choice.

WSU PRESENTS ‘NEXT TO NORMAL’ AND ‘GHOSTS: IF TRUMAN MET EINSTEIN’

The first, K.C. Brown’s “The Realm of Whispering Ghosts: If Truman Met Einstein” runs Jan. 26 to Feb. 4 at the Studio Theater, in the lower level of the Hilberry, 4743 Cass in Detroit.

When a young woman who died during the bombing of Hiroshima, and an American who met her when he was a prisoner of war decide to change the course of history, and aim to have Harry Truman meet Albert Einstein, events do not go as planned, and may have unintended consequences.

The Pulitzer Prize-winning musical “Next to Normal” runs Jan. 27 to Feb. 12 on the Hilberry main stage. The show, the graduate company’s first musical, features music by Tom Kitt, and book and lyrics by Brian Yorkey.

The rock-infused, innovative musical focuses on a middle class mother’s bipolar disorder and the destructive impact on her family. The show, which premiered in 2010, was the first musical in more than a decade to win the Pulitzer Prize.

For tickets and more information for both shows, call 313-577-2972 or go to theatreanddance.wayne.edu.