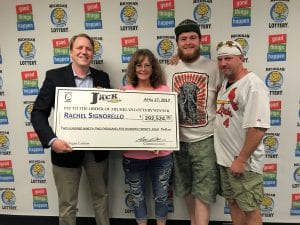 TAYLOR – A waitress at Playoffs Sports Bar and Grill had to lock herself in a bathroom so she could calm down after winning a $292,524 Club Keno The Jack prize from the Michigan Lottery April 14.

“My husband had been at Playoffs visiting me during my shift and playing Club Keno,” Signorello said. “He was getting ready to leave for the night, so we said ‘good night’ and I went on with my shift. The next thing I know he called me at the bar and told me to keep playing The Jack because he had a ‘feeling,’ so I did.

“I only had $10 on me, so I bought a two-spot ticket for five draws with The Jack. I won on the very last draw on my ticket.”

Signorello couldn’t believe she had won, so she re-watched the draw on MichiganLottery.com.

“As I was watching the drawing people kept gathering around me and congratulating me,” Signorello said. “I was getting overwhelmed so I snuck off to the bathroom and locked myself inside so I could compose myself.”

Signorello visited Lottery headquarters with her husband and son to claim the big prize April 17. With her winnings she plans to buy a new home, pay some bills, make a donation in her niece’s honor to a charity that supports Huntington’s disease, and save the remainder.

“Winning takes so much financial pressure off of my family, I just keep asking myself, ‘Is this real?’” Signorello said.

The Jack is a Club Keno add-on game that players may add to their wager for as little as $1 per draw. With The Jack, players get eight easy pick numbers to match to the Club Keno numbers drawn. Players may win prizes ranging from $1 to the jackpot. The jackpot starts at $10,000 and grows until it is won. To win the jackpot, players must match all eight numbers.