LINCOLN PARK – The family of Jorge Garcia Sr., who was brought to the U.S. undocumented at age 10, and who was deported to Mexico Jan. 15, continues efforts to reunite their family.

U.S. Rep. Debbie Dingell (D-Dearborn) and U.S. House Minority Whip Steny Hoyer (D-Md.) met with the family Feb. 18 to bring attention to their ongoing reunification efforts. Garcia, who worked as a landscaper, and never even had a traffic ticket, has been trying for years to become a legal U.S. citizen.

Hoyer called for the U.S. Senate to pass legislation which will solve the Deferred Action for Childhood Arrivals issue and put the country on a path to comprehensive immigration reform.

Hoyer said for years he was on the Helsinki Commission trying to convince the former Soviet Union to allow families of defectors to reunite.

“It was an American value that we wanted reunification,” Hoyer said. “How ironic it is now that we wrench a dad away from his family who has been a productive part of our community.”

Hoyer said in Congress they talk about big numbers, but talking about individuals like Garcia’s wife, Cindy, and their children, Soleil and Jorge Garcia Jr., is more compelling.

“Your actions may well help hundreds of thousands of others that have the same challenge you have,” Hoyer said to the Garcia family.

“There are families who are reaching out to me who are in the same situation and they are saying they are overwhelmed that we have the courage to stand up and fight, and you don’t just talk about your family, you mention everybody,” Cindy Garcia said. “We are happy that someone is standing up for us.” 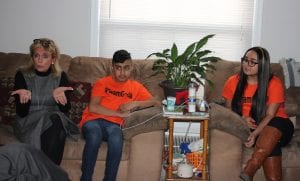 She said the more she speaks, the more educated people become about the issue.

“The more they can humanize the issue, that it is not just an immigration issue,” Garcia said. “Put a face to the word ‘immigration’ and this is a full circle that we have to come to.”

Garcia said the landscape company owner for whom her husband worked misses him.

“With the snow that they had, it was rough,” she said. “He was short one man. My husband would get there early, get all the trucks out, get them running, have the salt on and now they are like, ‘Jorge’s not here.’”

Garcia, who is medically restricted from lifting more than five pounds, said when snow was plowed in front of their driveway, neighbors helped them clear it, while continuing to express their support for their family.

“The neighbors have said if we need anything, to let them know, and they are here for us as a community,” she said.

Soleil Garcia, 15, said her friends have been supportive, and her cousins in Chicago are doing a project in school to raise awareness about DACA and immigration issues that can impact families.

“It is crazy how different schools discuss us in the classroom,” Soleil said. “I told my cousin to tell them that I am family and if they need me I can come.”

She said she still has days where she will walk into a room of the house and expect her father to be there.

“Now that he is not here, I will sit on the couch and think, ‘What time is it?’ ‘Why isn’t he here?’ and I remember it is just us three,” she said.

Soleil said her father keeps reminding her and Jorge Jr., 12, to keep going to school and taking each day as it comes.

“My dad keeps telling us to go day by day, don’t let our grades fall down, and that he’ll be home soon,” she said.

Soleil said when the family dog, Chito, a pit bull, hears her father’s voice on the phone, he just looks around, confused, trying to find him.

Cindy Garcia said the three are supportive of each other.

“We try to make each other laugh when we think somebody is sad,” she said. “Whenever we laugh, our friends take pictures, and they are like, ‘This is the way we want to remember you guys. We don’t want you to be sad.’ It is a day-by-day process.”

Garcia said the United Auto Workers, of which she is a member, has been supportive since 2009, telling her they are there for whatever she needs. She is medically retired, due to chronic pelvic pain, from Ford’s Dearborn Truck Plant, where she installed seat belts on F-150s, and is now living on her retiree income at 45 years old.

“It is a struggle,” Garcia said. “I can’t lift more than five pounds. Going to the grocery store is where I miss him. Who is going to lift the milk, the potatoes? You don’t realize how many things weigh five pounds. You can’t overload the grocery bags. He was our caretaker, always with us.”

She said she is learning how to do things differently on her own.

“Who’s going to take the garbage out?” Garcia said. “It is a different struggle every day with different things, and you don’t think about it until it happens. If I put windshield washer fluid in, how does that open? I got to learn to do this by myself.”

She said the snowblower is sitting in the garage because none of them were ever taught how to use it.

“We didn’t think about all this,” Garcia said. “Cutting grass, we have to figure out. Shoveling snow – I can’t lift more than five pounds. You don’t realize these things until they happen. I am like – wow – who is going to help me now?”

Hoyer said it bothers him that the president focused on criminal illegal immigrants in his State of the Union speech instead of people like Jorge Garcia Sr.

“The immigrant population has made an extraordinary difference in our country, a positive difference,” Hoyer said. “I am convinced that the American people would say it made no sense to send Jorge Garcia out of the country, away from his family, from a country where he went to school, worked every day, has never committed a crime, has been a positive part of this community.”

Hoyer said he is convinced that most American would support bringing Garcia home.

“Home is here in Michigan, with his family,” Hoyer said.

Cindy Garcia said they need to keep the momentum going.

“We don’t want this story to end,” she said.