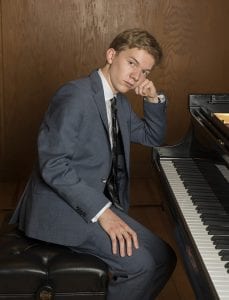 DEARBORN – The Dearborn Symphony, under the baton of Maestro Kypros Markou, will present works by Roustom, Prokofiev, Dvorak and Offenbach at 8 p.m. May 4 at the Ford Community & Performing Arts Center, 15801 Michigan Ave.

Joining the orchestra will be Charles Berofsky, who won the symphony’s 2018 Youth Artists Solo Competition.

The symphony’s 56th season concludes with musical images of “home.” The Syrian spirit resonates in “Aleppo Songs” by the contemporary Syrian composer Kareem Roustom who writes that “Aleppo was a city known for many things … its wonderful cuisine, its seven miles of covered markets, the warmth of its people … and also … its music.”

Three of the songs are a reflection on urban folk songs from Aleppo, known as qudud. Two of the five songs were composed by Egyptian composer Sayed Darwish and “are so universally known and loved in the Arab world that non-Egyptians often claim his melodies as their own.”

Seventeen-year-old pianist, composer, and organist Charles Berofsky will perform Prokofiev’s “First Piano Concerto.” Berofsky has already won a number of young artist competitions and will be attending Eastman School of Music in the fall with a double major in Piano Performance and Composition.

The winner’s cash award is funded by the Anina and Ben Bachrach Trust. Awards for two runners-up are funded by the Frank and Mary Padzieski Trust.

The program concludes with Offenbach’s “Orpheus in the Underworld” with the Dearborn Youth Symphony side-by-side. A rousing introduction to the Overture is followed by featured instrumental solos —  clarinet, oboe, cello, and violin — before closing with the “Infernal Galop,” or “can-can” that brings the Overture and the season to a to a high-volume, vibrant finale.

The Dearborn Symphony has partnered with local restaurants for “Dinner and a Concert.” The restaurants — Andiamo Dearborn, Big Fish, The Dearborn Inn, Giulio & Sons at Edward Hotel, Tria at The Henry, and La Pita — offer a 20 percent discount to symphony ticket-holders on concert nights. Reservations are recommended.

Season sponsors include Ford Land and Dearborn Sausage Co. with additional support from the Michigan Council for Arts and Cultural Affairs and the National Endowment for the Arts. The Exchange Club of Dearborn provides support for this concert that features up and coming stars.