‘Sweet Charity’ at PGD; ‘Into the Woods’ at SCP; ‘Spelling Bee’ at EFHS; One Acts at HFC.

From romantic musicals to a Shakespearean tragedy, local stages are brimming with talent and offerings. Among the offerings are “Sweet Charity” at the Players Guild of Dearborn, “Into the Woods” with the Southgate Community Players, “The 25th Annual Putnam County Spelling Bee” at Edsel Ford High School in Dearborn, “Studio Theater Showcase of One Act Plays” at Henry Ford College, “King Lear” at the Hilberry, and “Really Rosie” at the Motor City Youth Theatre in Livonia.

As the closing show of the Players Guild of Dearborn’s “Season of Simon,” the musical features a book by Neil Simon, music by Cy Coleman and lyrics by Dorothy Field.

Booth said the cast and crew are working hard to bring the Neil Simon work to life.
“Richard and I are committed to making ‘Sweet Charity’ a great hit for the end of the Players Guild 90th season,” Booth said.

Matt Mayes of Melvindale, who plays Herman, the club owner, also encourages audiences to come see the last Simon show of the season.

Mayes said rehearsals have been a “fun and wild ride.”

“This show is a timeless classic that can relate to anyone going through the journey of love,” Mayes said.

Walter Middlebrook of Detroit, who plays Daddy Brubeck, a larger-than-life, charismatic preacher, said the spirited service his character leads is one of Charity’s more hilarious escapades. He said his character differs from his own personality, which is reserved until he gets to know someone.

“The character allows me to show that other side,” he said. “I love the song, ‘Rhythm of Life,’ a rollicking hymn that we hope will get everyone on their feet.”

Rebekah Preiss, who plays Rosie, and a Fandango girl, said she is also playing characters different from her own personality.

“I usually play more innocent characters, and the Fandango girls are definitely not innocent,” she said. “I had fun getting to be more risqué than I usually get to be on stage.”

Preiss said the Fandango girls dream of bettering their lives, and she hopes the audience takes away that optimism, the belief that we each control our own destiny.

“Charity still has hope, optimism, confidence and love for herself, and that is all that really matters,” Preiss said. “She believes her happy ending is out there, and that little bit of hope and optimism can go a long way.”

Kenyada Davis, who plays the male lead through three roles – Charlie, Vittorio and Oscar Lindquist – said he wished he had learned some of the show’s insights earlier in life.

“Rather than searching to be loved, love comes from within first,” he said. “If you want something, stop dreaming and go get it.”

Davis said the cast is focused on making the show an amazing one for audiences, as well as something to which they can relate.

“We hope when you come and see the show you take away a sense of warmth, delight and awareness of who you are and how you should be loved,” Davis said.

Also in the cast are Shauna Rae Hazime as Charity Hope Valentine, Kelly White as Nickie, Kaela Green as Helene, and Michelle Kerr as Ursula and a Fandago girl.

Tickets are $20, with a $2 student discount. For more information or to order tickets, call 313-561-TKTS or go to playersguildofdearborn.org. 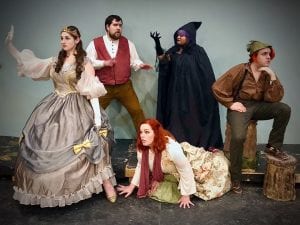 The Southgate Community Players close out its season with the Tony Award-winning musical “Into the Woods,” with music and lyrics by Stephen Sondheim and book by James Lapine.

The story, which intertwines the plots of several well-known fairy tales, explores the consequences of getting what you wish for and what happens after you achieve your quest. The story is anchored by a childless baker and his wife, and overlaps with Little Red Riding Hood, Jack and the Beanstalk, Rapunzel, Cinderella and several other familiar themes.

The show is directed by Karen Connor of Wyandotte, with vocal and music direction by Rebecca Roberts of Clinton Township.

The cast includes Ashley Lyle of Lincoln Park as the Witch; Dalton Pittman-Cahill of Westland as the Baker; Tamara Marla Laflin of Southgate as the Baker’s Wife; Jamee Perryman of Oak Park as Cinderella; Andrew McComas of Berkley as Jack and Taylor Charbonneau of Gibraltar as Little Red.

Logan Laflin of Southgate plays Cinderella’s Prince, with Dylan Hart of Taylor as Rapunzel’s Prince; Lonnie Curri of Wyandotte as Jack’s Mother; Rob Eagal of Trenton as the Mysterious Man; Joshua Gray of Brownstown Township as the Narrator; and Danielle Miller of Warren as Rapunzel.

Edsel Ford High School in Dearborn presents “The 25th Annual Putnam County Spelling Bee,” a musical comedy, with music and lyrics by William Finn, and book by Rachel Shenkin. It follows elementary school-aged overachievers vying for the district spelling bee championship, and adults with their own angst, as they tell their stories and learn that losing at something doesn’t make them a loser.
The show runs 7 p.m. May 3 to 5 in the school auditorium, 20601 Rotunda Drive. The play is mostly family friendly, with some mild adult language and situations.

The show, produced and directed by Robert Doyle, features the musical direction of Jim Walters and choreography by Simone Calvas.

Lesley Adams plays overachiever Marcy Park, with Maya Moreau as Olive Ostrovsky, a quiet only child with an absent father, Oscar Vasquez-Torres as the easily distracted Leaf Coneybear, and Ava Dobos as the lisping but politically precocious Logainne Schwartzandgrubenierre.

Henry Ford College’s new actor-driven space, the Studio Theatre, designed by George Popovich, will launch with a showcase of one act plays at 8 p.m. May 3 to 5, and 2 p.m. May 6, in the MacKenzie Fine Arts Center, 5101 Evergreen, Dearborn.

Director Gerry Dzuiblinski said the space was designed with audience-actor interaction in mind, by placing both in close proximity in an intimate setting.

“With the actor a few feet in front of you, the energy between characters and the audience is so strong you can feel it,” Dzuiblinski said.

The showcase features five short plays. The first, “The Contract,” is a comedy by Theresa Rebeck, with Dakota Nuttall of Riverview and Elijah Liddell of Detroit.

Next is “The Rainbow,” a romantic comedy by James Armstrong, with Avise Wilson of Detroit and Danny Alnouri of Dearborn Heights.

Tickets are $5, and are available at the door and online, at hfcc.edu/campus-life/theatre.

Wayne State University’s graduate theater company presents Shakespeare’s “King Lear,” a drama of political intrigue and family betrayals. The show runs through May 13 at the Hilberry, 4742 Cass, Detroit. For tickets or more information, call 313-577-2972 or go to theatreanddanceatwayne.edu.

Dearborn Heights actress Rachel Rudzinski is sharing the role of Kathy in the Motor City Youth Theatre production of “Really Rosie,” which runs 7 p.m. May 11 and 12, and 2 p.m. May 13 at the group’s theatre, 27555 Grantland, Livonia.

The play is based on the stories of Maurice Sendak, who wrote the script and lyrics, with music by Carole King. Tickets are $12, with a $2 discount for students and seniors. To order, contact [email protected] or go to eventbrite.com.