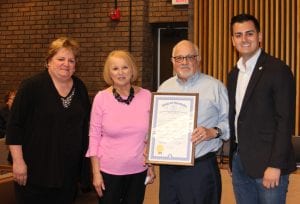 Wagner, who was hired by the city in November 2011, retired in February.
Camilleri praised Wagner for his service not only to the city, but to the entire Downriver region.

“He has been a tremendous champion for our communities, to make sure that we have incredible places to live, as well as create places we are proud to call home,” Camilleri said. “Jim has worked many years making sure that government works for the people.”

Wagner credited his wife, Pamela, for supporting his success, and Mayor Kyle Stack and the City Council members for giving him the opportunity to serve as the Trenton city manager. He also recognized his staff, many of whom were present.

“The men and women make this community,” Wagner said. “I am very appreciative. You live in a great community, and all of you  are part of the great community that makes this a great place to live. You make the difference.”