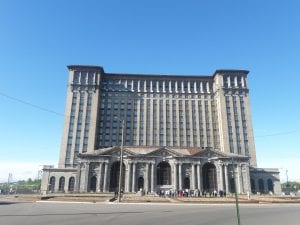 DEARBORN — Ford Motor Co. will officially announce the purchase of the vacant Michigan Central Station in Detroit on June 19 after months of speculation.

Crown Enterprises Vice Chairman Matthew Moroun gave a speech in front of the building June 11, where he said the deal was complete between the company and Ford.

“The Ford Motor Company’s blue oval will adorn the building,” he said. “I thank Bill Ford and Ford Motor for their vision and commitment to this building.”

Ford is rumored to be redeveloping the station and surrounding properties in Corktown, but its next steps have not formally been announced. On June 14, a large video screen was being erected in front of the building for the June 19 event.

Moroun said it was a meeting arranged by a friend in October that opened the door to the development he was looking for.

“I had mixed emotions,” he said. “I knew that this was exactly what the building needed. The golden opportunity for its rebirth. The American second chance. I also knew that it would not be possible for me and our company to co-captain such a dramatic project. The depot’s revitalization would only be part of an enormous plan taking in much more than the depot itself. The developer had to be the owner and user.”

Currently in Dearborn, Ford is completing a $1.2 billion retransformation project by adding a research and engineering center and major work on the second campus near its headquarters. The goal for Ford is to move its 30,000 employees from its current 70 buildings into the two campus locations.

“We’re excited about Ford’s investment in Detroit, because it will strengthen the vitality of a critical area so close to our city, with the real potential to enhance even more economic interest in our community,” O’Reilly said in a statement. “Ford’s commitment to Dearborn and Detroit reflects positive developments in both cities.”

The 18-story, 500,000-square-foot central station building will possibly house employees from Ford’s self-driving and electric vehicle divisions. In May, Ford’s electric vehicle and autonomous vehicle teams moved into The Factory at Corktown, 1907 Michigan Ave. in Detroit.

According to the Detroit News, Crown officials have said in the past that the restoration cost for the station could cost between $100 million to $300 million.

The Ford Corktown community celebration will begin at 11 a.m. June 19 at the station, 2001 15th St. in Detroit.
(Zeinab Najm can be reached at [email protected])