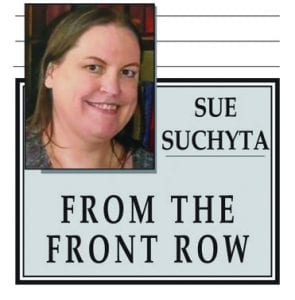 If you aren’t able to spend your summer at the shore, local theaters can bring the ocean to you, with the Dearborn Summer Theatre’s production of Disney’s “The Little Mermaid” and Henry Ford College’s production of A.R. Gurney’s “What I Did Last Summer.”

The Dearborn Summer Youth Theatre takes audiences to an enchanting undersea world with Disney’s “The Little Mermaid.” The show, with book by Doug Wright, features the music of Alan Menken, with lyrics by Howard Ashman and Glenn Slater.

The show is directed by Rashid Baydoun, assisted by Lisa Cronin, with vocal direction by Vanessa El-Zein and costumes by Marci Savage Holmes.

Director Baydoun said the three week summer program casts all the participants, ages 11 to 17, in the show, which he said takes full advantage of the wonderful Guido Theater facility.

“It’s a learning curve,” he said, referring to his cast. “Sometimes being around more seasoned actors it makes you a better person, because you learn things.”

He said casting strong singers was his primary focus. They held workshops before they cast the show.

“You have to hold your own,” he said. “Anyone can sing on the risers, but it is taking those vocals and putting them into action, that makes Broadway.”

Costumer Holmes said she loves the creative aspect of the play, bringing Baydoun’s vision to life.

“They have the spandex, which is able to have them move, and we have these wonderful headpieces that we got from Stagecrafters,” she said. “As soon as I knew this show was happening, I was starting to collect things. Then I have three weeks, because I don’t know who is cast in what. That’s a challenge as well.”

Hermen is playing his third leading role locally this year, having played Jacob in “Lost in Yonkers” at the Players Guild of Dearborn and Jesus in “Godspell” at the Downriver Actors Guild. He said Prince Eric is a straightforward role.

“He’s royal, but there is also that laid-back sailor attitude,” he said. “So he’s got the kind of swashbuckling hero to him.”

McKelvey said she relates to the character of Ariel in her own life.

“Being able to think that there is a whole new world out there, I think that is really cool,” she said. “If she wants something, she is determined to get it.”

Baksh said playing Sebastian is a dream role for him.

“He’s helping Ariel through all these things and having to deal with Triton and Ariel,” he said. “I have to be strict with Ariel to follow King Triton orders, but I am her friend also.”

Grace Mercuri, who played Mrs. Potts in “Beauty and the Beast” last year, said Ursula is the first villain she has played.

Also joining Ariel on her journey are Yasmeen Keaik as Flounder, Micah Andrews as Scuttle, Nathan Gothro as Chef Louis, Thomas Besek as the pilot, Layla Salha as Leeward and Lindsey Adams as Windward.

The Mersisters include Nadia Gellani as Aquata, Olivia Kirk as Andrina, Giana Lerini as Arista, Allison Koehler as Atina, Sophia Mijat as Adella and Sara Barakat as Allana.

The chefs are played by Lilly Balino, Sireen Bazzi and Penny Soranno.

HFC PRESENTS ‘WHAT I DID LAST SUMMER’

A.R. Gurney’s “What I Did Last Summer” takes audience back in time, in a sentimental comedy set in 1945, during the final summer of World War II, on an island off the east coast.

The coming of age story has Charlie, 14, whose father is away at war, on vacation with his mother and sister. What he thinks will be an idyllic summer turns into a time of change: his first job, a girlfriend and exploring new ideas that are opposed to those of his conservative mother.

Directed by Mary Bremer-Beer, the cast includes Audriana Minnis of Detroit as Elsie; Dakota Nuthall of Riverview as Charlie; Isabella Johnson of Warren as Bonny; Jessie Mattox of Woodhaven as Ted; Amanda Bates of Dearborn Heights as Grace; and Judith Fletcher-Barber as Anna, the pig woman.

Bremer said it is a sweet show, with a lot of humor.

“As you watch it, it is like living in another time,” she said. “It’s like going back to a simpler time. And there is a lot of mime in this – not a lot, but more than you would imagine.”

Mattox, who plays Ted, said his character is the older friend everyone had in high school who picks on you and acts cool, but is a true friend.

“Through life, you will always have those few friends that stick by you, the ones who have been there for years, and will hopefully be there for years to come,” he said. “But I think it is the era of this show that really shows the friendships and how they grow and how strong they can be.”

“She’s been influential in a lot of young people’s lives,” she said. “She is a teacher, and that is her passion. She is an artist “manque,” which means an art teacher.”

She said her character has lived an alternative lifestyle for 1945, and she is half Native American.

Fletcher-Barber said she enjoys teaching and directing, but when this role came up, she was pleased to accept the opportunity.

“It’s a really interesting, meaty role,” she said. “I don’t pursue them, but this fell in my lap and I jumped at it.”

She said she has enjoyed seeing her young cast mates grow into their roles.

“It’s always cool to see them grow, and I am enjoying that,” she said.

Tickets are $14, with a $4 discount for students, staff and seniors. To order, go to hfcc.edu/campus-life/theatre.

Director Paul Bruce said those auditioning should prepare a vocal audition with their own accompaniment, and should be prepared to dance. With the exception of Scrooge, all actors will play multiple roles. Rehearsals will begin in September, with 10 performances, Nov. 29 to Dec. 16.

The show focuses on the idea that one moment can change anyone’s life. The show features the vocal talents of Tamara Marla and Logan Laflin of Southgate, Jamee Perryman of St. Claire Shores and Cory Shorter of Dearborn Heights.