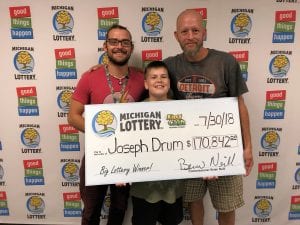 “I stopped and bought one ticket at the 7-Eleven, but it wasn’t a winner,” Drum said. “When I got back in my truck, just before I started it, something told me to buy one more.

“After I looked it over, I thought it was a winner, so I had the clerk scan it. She told me I would need to go to Lansing, so I was thinking I’d won $600, until I called the Lottery and realized I’d won the jackpot!”
Drum visited Lottery headquarters July 30 to claim the big prize. With his winnings, he plans to fix up his house and buy a new TV.

“We’ve had some struggles, so winning is hard to describe,” Drum said. “It’s just such a relief and weight lifted off my shoulders.”

Fast Cash games are a series of instant-win games that print from terminals at Lottery retailers. Fast Cash tickets range in price from $1 per play up to $10 per play.

All of the Fast Cash games feed into one jackpot, which grows with every ticket purchased. The current jackpot amount prints on each ticket, so players always know the amount of the jackpot up for grabs.

The jackpot may be won at any time. As soon as the jackpot is hit, a new one starts again.