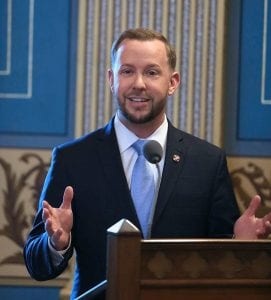 HEIGHTS — State Sen. David Knezek (D-Dearborn Heights), who was upset in the Aug. 7 Democratic primary to relative unknown Betty Jean Alexander of Detroit, said he will await the Board of Canvassers certifies the results before taking the next steps with his career.

“My team and I are waiting until the Board of Canvassers certifies the election before making any official declaration,” Knezek said in a statement last week. “A number of candidates have chosen this route due to the irregularities that took place on Election Day.

“For the past four years, I’ve been active and engaged across every city in the 5th Senate District. From a campaign perspective, we engaged voters this year through door knocking, digital outreach, and mailing over 100,000 pieces of literature. If the results stand, it won’t be due to a lack of effort.

“If we come up short after the Board of Canvassers certifies this election, my focus will turn to supporting (Democratic gubernatorial candidate) Gretchen Whitmer and other Democrats across the State of Michigan — that includes Betty Jean Alexander. This job is, and always has been, bigger than me. There is too much at stake this November.

“For the past six years, I’ve had the opportunity to represent seven cities in southeast Michigan. There are amazing people throughout each and every one of them; people who have welcomed me into their lives with open arms and love in their hearts. It would be impossible to just up and walk away from that kind of relationship.

“I made it through two tours in Iraq and I’ll make it through this, too. If the results stand, this will be an opportunity to refocus on the important issues we face here at home and to move forward with a renewed sense of purpose and optimism.”

He served in the U.S. Marine Corps in 2006 until he was discharged in 2012 when he also graduated from the University of Michigan-Dearborn with a bachelor of arts degree in political science.

Knezek first served as a state representative in the 11th District starting in 2013 before running for his current Senate seat in 2015.
In the primary election, Alexander received 18,926 votes against Knezek who received 15,803 votes. The 5th District serves Dearborn Heights, Garden City, Inkster and Redford Township and part of Detroit.

The election results left many shocked, including Alexander.

Campaign manager LaMar Lemmons III told the Metro Times that aside from the $100 filing fee, he and Alexander did not spend any money on the campaign.

Alexander had no campaign website or social media pages and relied on phone banking and volunteers. The 53-year-old has no college degree, but has taken some college classes and technical training for her current job as a clerical records position.

She told the Metro Times she plans to focus on education, insurance rates, clean and affordable water and pay wages.

“I also feel the insurance is ridiculous,” Alexander told the Metro Times. “Everyone should have insurance at the same rate — it shouldn’t matter where you live, what ZIP code, if you’re in Detroit, a suburb, whatever. Right now insurance is basically another car note, so I see why a lot of people don’t have it, because they’re like me. It’s like, OK I’m going to have insurance … but then you get your insurance and it’s like, ‘Well now I’m not going to be able to pay my DTE.’”

Lemmons did not respond to emails requests to interview Alexander.