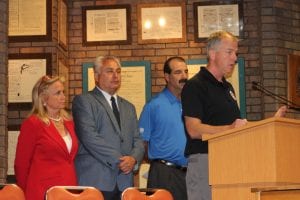 The EPA-proposed settlement agreement protects the non-responsible parties – the new developers – from lawsuits, puts the former McLouth site on the list for federal Superfund cleanup money, and clarifies cleanup and demolition responsibilities.

Crown’s tear-down and remediation responsibilities, through subsidiary MSC, for the southern 183 acres of the site are detailed at epa.gov/superfund/mclouth-steel.

For the northern part of the property, the EPA will sign a Memorandum of Understanding with the Michigan Department of Environmental Quality. MDEQ will commit to ensuring that Crown subsidiary Riverview-Trenton Railroad Co. cleans up the northern 76 acres of the site in accordance with Superfund guidelines.

Dingell said concerns about the McLouth site have been voiced for two decades.

“This site has been an eyesore in the community for longer than some of our kids can remember,” she said. “It sits there as a symbol of the past, and of tougher times, and it is time for us to stop looking backwards, and to start looking forward, toward the future, and what is going to keep this community strong.”

Dingell said the top priority is ensuring that the site is properly cleaned up, and is not an environmental or safety risk to Trenton or the surrounding communities.

“Public participation is going to be a critical part of this process,” she said. “I encourage all to make their voices heard and ask the questions they may have.”

Dingell said there is still a lot of work to be done to clean up the property, but called for optimism.

Dingell said she will continue to work with Downriver officials going forward to make sure they have the information they need about the remediation.

“If there are concerns, we will address them,” she said. “It’s time. Let’s move on.”

Kelly said in his 16 years with the EPA he has worked on a wide range of projects, from the anthrax cleanup in Washington, D.C.; the BP oil spill; the Enbridge pipeline spill; and the Flint drinking water response.

“Always on my mind is that in my own backyard is McLouth Steel,” he said. “I have been working on and off on that site for 14 years, dealing with PCBs, dealing with drums, dealing with the fire that interfered with Trenton’s graduation ceremonies, leachate coming into Jefferson Avenue, the mercury spill that occurred last year, so it is certainly time that something happens there.”

Kelly said things are moving in the right direction, but it will be a long process, with multiple agreements that will impact the cleanup, with the Riverview section of the site being cleaned up under state authority.

“There is specified work that will be done on the Trenton part of the property, and then there is going to be a Superfund listing of the southern property,” Kelly said. “When the MDEQ starts looking at the work plans to clean up the northern parcel, there will be a public meeting.”

Kelly said there will be another meeting when the southern property attains Superfund status, and there will be multiple opportunities to engage with the regulatory agencies.

Kelly said he does not know what Crown will do with the property, but as long as its redevelopment is protective of area residents and does not interfere with the cleanup, that does not fall within the EPA’s purview, and will fall to the municipalities, the zoning boards and the building departments.

Kelly said the MSC will prepare a traffic management plan on the truck traffic during the environmental cleanup phase, in conjunction with the EPA, MDEQ and the cities of Riverview and Trenton. He said, but after the cleanup, truck traffic will be outside of the EPA’s purview.

He said multiple governmental agencies overseeing the agreements will impact the site cleanup.

“Wayne County, the DEQ, the EPA, the U.S. Department of Justice have all signed on to this agreement,” Kelly said. “It’s not like we are all just going to go away. I plan to spend significant time at that site, I am listed in the settlement agreement as EPA’s on-scene coordinator, and if anyone has any questions, please let me know.”

Trenton Mayor Kyle Stack said she couldn’t ask for a better team of people with whom to work.

“We have some more phases to go through, but we’ve got a great start now,” Stack said.

Palamara said the focus today is not on what will be developed on the site two years from now, but about getting rid of blight and contamination.

“This is about knocking down those eyesores, cleaning up the land, making the land something all Downriver people can be proud of again, to drive by,” Palamara said. “God willing, we will have clean land and a very nice development in the very near future.”

Perry said the emphasis should be on going forward with the cleanup.

“The DCC is about issues like this, working together, because we are all one,” he said. “We are going to make this happen.”

Stack thanked Crown for moving forward with the project.

“There are things that they still have to work out, but I want to thank (Crown) for taking an interest in our community,” Stack said. “This is one of the things that is going to be a great thing. I don’t have to look at those buildings any longer, and maybe be able to see some water on the other side, and for being a great partner in this.”

Dingell said this was a beginning, and about hope, but the cleanup would take a while.

“The No. 1 priority is to make sure that the ground is safe, that with the water we don’t have leaching, that the water is safe,” Dingell said. “It is going to take time.”

She said without Superfund, there has been no other way to pay for what will be an expensive cleanup, and she will continue to fight to get Superfund money for the McLouth site.

“It is going to take time,” Dingell said. “But there is a plan, and we are moving forward with getting this site cleaned up.”