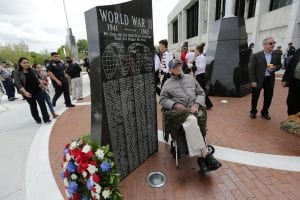 DEARBORN — For most visitors, the names on the War Memorial in front of Henry Ford Centennial Library are little more than letters carved into black stone.

But Dearborn historian Lisa Lark wants the community to remember that each of those 347 people who died in service to this country was once a real person with family and friends in the community, with their own interests and dreams.

Lark is asking for the community’s help as she gathers information on those service men and one woman, especially those who died during World War I, World War II and the Korean War.

Lark previously researched the 69 Dearborn servicemen who died during the Vietnam War. That eventually led her to work with the national Vietnam Veterans Memorial Fund and its Call for Photos project. She gathered information about Vietnam veterans from across the country and eventually penned a book “All They Left Behind,” recounting some of those stories.

“The genesis for this project was a question from one of my students after Edsel Ford High School’s Memorial Day ceremony in 2010,” Lark said. “A student asked for more details about one of the soldiers on Edsel’s memorial, and I realized that the answers were not readily available.

“I worked with the city to gather the stories of the men lost in the Vietnam War for the 2011 Memorial Day Parade, and we received such a positive response,” she said. “All three high schools now host Memorial Day remembrance ceremonies, so the project naturally expanded.”

Now, Lark is again turning her attention to fallen Dearborn servicemen. While she will take more information about the Vietnam veterans, she is focusing on the other 278 people remembered on the four cenotaphs in the memorial.
This month marks the 100th anniversary of the death of the first man listed on the memorial — Walter Blankertz. He was the only Dearborn man killed during World War I.

Lark is hoping friends and family of the Dearborn residents who died in service will contact her and provide more biographical details about the fallen soldiers. To assist, the city has created a website listing all the names from the War Memorial.

Lark has also created a Facebook page for the Dearborn Memorial Project. There she plans to regularly feature different people listed on the memorial and gather information from the community. She can also be contacted via email at [email protected]

“The reason for this project is to tell the stories of those on the memorial,” Lark said. “As time passes, it is important to remember that the names on the memorials were real people with real stories.

“From an educational perspective, these stories will help students understand the war on a more personal level; these men and women went to their schools, lived on their streets. The lessons become more impactful when the students can make that connection.

“This project also will put all of the city’s excellent historical resources in one place, which will be helpful for genealogical purposes as well.”

Already, she is filling in the details about some of the names.

• Harold Wurtz was serving in New Guinea when his aircraft went missing in 1945. He had flown 95 combat missions. His remains were identified in 1996, and he was buried in Arlington Cemetery in 1999.
• John Freckleton died when his ship, the USS Mannert Abele, was sunk by Japanese kamikazes in April of 1945.
• Friends Charles Hanselman, Douglas McIlroy and Michael Niezgoda graduated from Edsel Ford together and joined the Army together. They planned to spend Christmas 1968 together after they served their tours in Vietnam. None of them made it home.

Dearborn has had a war memorial since 1942, when those who died during World War II were added, listed by their date of death. The billboard-sized memorial in front of City Hall saw additions to make space for the names of fallen Korean and Vietnam service members.

Then, in September 1974, that memorial was smashed by a teenager joyriding in a stolen car. The memorial was rebuilt and moved to a different location near City Hall, but taken down a few years later to make way for the expansion at the City Hall campus.

Then in 1991, the city and the Dearborn Allied War Veterans Council dedicated the new War Memorial at the corner of Schaefer and Michigan Avenue. The black marble memorial stood at the corner for more than two decades until the city offices moved a few years ago to the Dearborn Administrative Center. After that, the War Memorial was relocated to the new Veterans Park in front of Henry Ford Centennial Library. The new park was dedicated in September 2016.