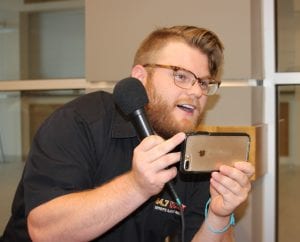 ALLEN PARK – It may not be “Mainstreet,” but Bob Seger Boulevard runs east of the new city hall, from Southfield Road to White Avenue, between Shish Palace and the new Culver’s restaurant.

Seger, who is claimed as a onetime resident by Melvindale, Lincoln Park and Ann Arbor, reportedly played at the Allen Park Civic Center in the early 1970s.

“I looked at this as a great opportunity for a positive promotion for the community,” Kibby said. “We have had our fair share of negatives over the last couple years, and this was a really good positive way, and I am hoping that the mayor and council will agree.”

Kibby said he purposely found a section of road that would not have an impact on any addresses.

Kibby showed a model sign that the Department of Public Works prepared for him, and said the radio station would likely have additional promotional street signs made for either a contest or charity promotion.

To announce the new street name, Kibby said he tried to reference as many Seger songs as he could in the resulting memo.
“So, if you are a ‘Travelin’ Man’ or a ‘Ramblin’ Gamblin’ Man’ heading down ‘Mainstreet,’ ‘Against the Wind’ towards the ‘Nutbush City Limits’ listening to that ‘Old Time Rock & Roll,’ hopefully ‘You’ll Accomp’ny Me’ to Allen Park to check out Bob Seger Boulevard,” Kibby said, amid applause and appreciative laughter.

“His connection with us is playing at the ice arena in the day, ‘Back in ’72,’” Kibby said. “WCSX radio had been working to create Bob Seger Boulevard as a tribute to a legendary singer. They worked with Ann Arbor, and they thought they were going to have something at Pioneer High School, but that fell through.”

Kibby said he emailed the station, and when they decided to mention it on the air, Kibby said he quickly contacted the mayor and city council members to inform them of the turn of events.
Mayor William Matakas asked if the city faced any possible infringement from the singer or family if it names a street after him.
Ryan Logan, producer of the morning show on WCSX, said it would not be a problem.

“We’ve talked to their people, and this is a complete go with them as well,” Logan said.
(Sue Suchyta can be reached at [email protected])