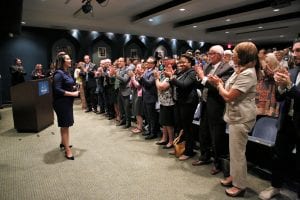 “We have 70 days to decide whether or not we are going to be a part of making the future that we all deserve, and I’m not backing down from that challenge and I know you won’t either,” El-Sayed said. “That’s why I am supporting the Gretchen and Garlin ticket, and I believe you should too.”

Whitmer joked that she enjoyed more being on the same team as El-Sayed instead of against him when he was her opponent on the Aug. 7 Democratic primary ballot.

She said the energy that El-Sayed brought to the primary race was the reason 141,000 more people voted for Democrats over Republicans.

“One of the things Abdul and I talked about, even when we were having some of those debates was that the things that unite us are a heck of a lot more powerful and important than anything we disagree about in the primary,” Whitmer said.
Whitmer said she loves the state of Michigan, but when she looks around at the Michigan in which her children are growing up, it does not live up to the one she thinks of when she talks about her pride.

“This was the place people came to, from around the world for opportunity whether you came Lebanon, Yemen or Kentucky,” she said. “People used to come to Michigan because in Michigan you could get a good job that would pay well enough to raise a family up and retire with dignity.

“In Michigan you knew that the state that put the whole world in cars you could travel our roads safely and afford car insurance. In Michigan you knew no matter what community you settled in, whether it was Dearborn or Grand Rapids, that your kids would have a great public school education. And in Michigan, home to 21 percent of the world’s fresh water, you can confidently turn on your tap and bathe your children as well as give them a glass of water at the dinner table.”
She continued by telling the crowd that today’s families deserve nothing less than the Michigan she described.
“We are dangerously behind on all fronts because our leaders have not made investments that make this the place where our kids stay and our families can get ahead, and others come to for opportunity,” Whitmer said. “That is going to change.”

Whitmer then introduced Gilchrist, who spoke about the work still needed to be done, where he gets his energy, and family.

“See, committing to get health care for everyone in the state of Michigan is a generational choice. Committing to make sure we have strong educational institutions and infrastructure is a generational choice. These investments that we can make today empower our people tomorrow.”
Whitmer and Gilchrist answered questions from the crowd on diversity, health care, collective bargaining, gun law reform, public education, job growth, public safety and other topics important to the audience.
The audience included elected officials from Dearborn and Dearborn Heights, Wayne County and the state who attended to show their support for Whitmer and Gilchrist.
U.S. Rep. Debbie Dingell (D-Dearborn) was one of those elected officials who closed the town hall meeting with a fiery speech encouraging people to vote because their votes matter.

She spoke about how every American has a right to a job with a good salary, education for their kids, an affordable house in a safe neighborhood, graduate debt-free, and go to the doctor and afford the medicine.
Dingell added the importance of not forgetting about the needs of senior citizens and how important every day until the general election is.
“We are a community, and community is the strength of democracy,” she said. “If any of you, if anyone of you don’t work your heart and your soul out until after this election day and we wake up on election day and we have the hatred and evil we saw after the last election, you can only look at yourself.”
(Zeinab Najm can be reached at [email protected])