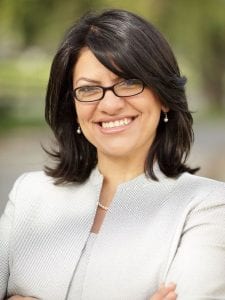 HEIGHTS — “You believed and we won,” read the thank-you letters Democratic 13th Congressional District representative candidate Rashida Tlaib sent to supporters who have positioned her to become the first-ever Muslim woman in Congress.

“The opportunity came about after John Conyers III’s retirement and it was a time when I was fighting back on a lot of issues,” she said last week. “I thought, ‘Am I gonna stay outside or jump in and fight against issues?’ It’s still sinking in that I won and I really didn’t process the win until 5 a.m. when every vote was counted in Detroit.”
Tlaib won the Democratic primary on Aug. 7 where she faced five other candidates and received the most votes at 27,803 to move on to the general election unopposed.

Tlaib’s victory received a lot of attention, which she is glad to share with Jahana Hayes who could become Connecticut’s first black congressional Democrat, and Alexandria Ocasio-Cortez who at 28 years old could be the youngest New York Congresswoman.

“What a powerful message that this happened at this time of our country,” she said. “We made history with our primary election wins during a time where Islamophobia exists, youth need a seat at the political table and African Americans lack a voice in government. We won by people-driven campaigns and it feels like a new era of the civil rights movement, in a way.”
She will serve a two-year term starting in January in a district that includes portions of Dearborn Heights and Detroit along with Melvindale, Ecorse, Garden City, Highland Park, Inkster, Redford Township, River Rouge, Romulus, Wayne and Westland.

She said her primary focus will be on environmental justice in Detroit and Romulus and on the air quality concerns in Wayne County. In Detroit, Tlaib said ensuring residents have clean air to breath, fighting against discriminatory practices by insurance companies and banks on home loans are her focus.

Tlaib is oldest of 14 children and the daughter of Palestinian immigrants. The Detroit native was the first to attend college in her family where she graduated from Wayne State University in 1998 with an undergraduate degree in political science, and then graduated from Thomas M. Cooley Law School in 2004.

She worked with nonprofits before entering politics in 2004 through an internship with former state Rep. Steve Tobocman. Tlaib is an attorney at the Sugar Law Center for Economic and Social Justice.
(Zeinab Najm can be reached at [email protected])