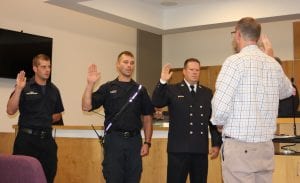 In 2014 Kolusk was awarded APFD’s highest honor, the Medal of Valor, for his role in the Leo Paluch Senior Housing fire evacuation.

“He and another firefighter were first in that building, on a hose line, and are responsible as part of a team of saving 60 residents,” Cann said.

Cann said Kolusk is an excellent mechanic, and uses his skills around the fire station.

Cann said that most days the engineer is also on the backup rescue, and those ambulances go out three to four times a day.

In 2017 Epperson received a lifesaving award from the Fire Department, for his work with a 57-year-old woman whose heart had stopped. Cann said her circulation returned, and she left the hospital with no lasting damage.

Epperson earned his nursing degree while a firefighter, and is a registered nurse working with hospice patients.
“That takes a special person to be able to do that,” Cann said.

Koppsch started with the APFD in June after working with the Macomb Fire Department. Before that he spent eight years in the U.S. Army, in the Special Forces as a Medical Sergeant for one-and-a-half years, is Airborne qualified, speaks French, and was a Cavalry Scout for four years, with more than 150 combat patrols in Iraq.
Cann said he received the Presidential Unit Citation, the Army Commendation Medal, and 14 other types of recognition.
Ajlouny came to APPD after eight years in the Beaumont Hospital, Dearborn, emergency room. He was with the APFD part-time in 2014, and held other medical positions, with Gift of Life of Michigan, Providence Hospital ER In Novi, and Medic One Ambulance Service.

Brown came to APPD from the Riverview Fire Department, and is an experienced paramedic, and worked the road for more than seven years as a community EMS, and for five years in the emergency room at Beaumont Hospital, Taylor.

“Congratulations to all these fine gentlemen, and for the service that they provide for the community,” Cann said.