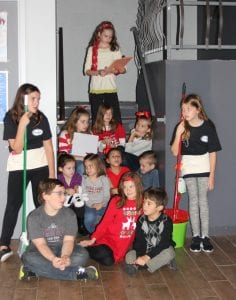 It’s the time of year again when ordinary folks don costumes to indulge their alter-ego, pretending to be someone else, and playing the part with glee throughout the Halloween season.

On local stages, characters and costumes continue to intrigue and entertain as always, as a youth theater, a university production and a regional professional theater light up the footlights with a student musical, Shakespeare and Shanley.

Imagine, if you will, that autumn has fled, and the December holidays are close at hand, when a snowstorm arrives and threatens to strand you at school. What to do?

Set at a school just before the start of winter vacation, plans to go on vacation, shop at the mall, visit with relatives and eating holiday treats are on everyone’s mind. A lovely snowfall begins, offering the promise of a sparkling blanket of white. However, the snowfall increases, and shows no sign of stopping. Will the students be stranded at school, cooking on Bunsen burners in the science lab, with each other instead of their families?

Open Book Theatre Company’s “Doubt,” which won the 2005 Tony Award for Best Play and the 2005 Pulitzer Prize for Drama, is a timely choice in the face of the clerical sex abuse allegations unfolding.

When a Catholic nun, a school principal, suspects a priest of impropriety with a young boy, she must tread carefully as she examines the gray areas between suspicion, certainty and doubt.

Director Wendy Katz Hiller said she has loved “Doubt” since she read it after it won the Pulitzer and Tony.
“I loved the way it raises more questions than it answers and that it has multifaceted characters grounded in the real world,” Katz said. “Although the play deals with possible sexual abuse by a priest, it connects to many different topics in today’s world, from claims of sexual harassment to the way people find their faith tested. The play is set in 1964, but the topics are timeless and the writing is both poetic and real.”

Tickets are $25, with a $5 discount for seniors and a $10 discount for students. Opening night tickets are $30, and include an afterglow reception. For tickets or more information, call 734-288-7753 or go to openbooktc.com.

Shakespeare’s “As You Like It,” directed by Lavinia Hart, is transported to present day Appalachia for a subversive twist on the clever comedy, and takes on gender-bending role swaps.

Hart said “As You Like It” is her favorite Shakespearean comedy.

“It offers a tour de force role for a graduate actor – Rosalind,” Hart said. “She’s Shakespeare’s female Hamlet, only she gets to have fun. She gets to explore the range of a wronged princess of the court, to a gangly boy, full of mischief, in the magical forest of Arden. The play offers the most spectacular array of choices in support of using an ensemble of actors to define the geography and atmosphere of the unforgettable Arden.”

Hart set the story in modern in Nashville and the Smokey Mountains of Tennessee.

“We have cast women in leadership roles in several instances: the lead politico in Nashville is the Duchess Frederica,” she said. “The god Hyman now becomes the goddess of the forest who also takes the human shape of Cora, a Shepherdess and maker of moonshine, and Rosalind who dons the clothes of a rascally boy of the woods and name of Ganeymede – Jove’s page who is a cup-bearer to the gods.

“These ladies guide, heal, wheedle, and coax the broken males in the play into harmony that is blessed by Hyman and her forest attendants, who also play deer, sheep and goats. This company and this design has amounted to an “as you love it” experience for the artists and, I hope, the audiences alike.

Tickets are $28, with a $5 discount for seniors, alumni, faculty and staff, and an $11 discount for students. For tickets and more information, call 313-577-2972 or go to theatreanddanceatwayne.com.