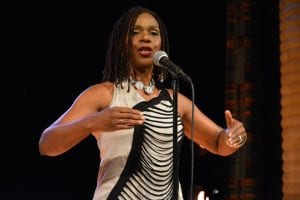 DEARBORN – The word “freedom” has many definitions. Dictionaries speak of the power or right to act, speak or think as one wants without hindrance or restraint; the absence of subjection to foreign domination or despotic government; or the state of not being imprisoned or enslaved.

But in real life, freedom can be much more complicated, far more personal. And it is only those who endure in their quest for freedom — in any form — who can speak to this experience.

In celebration of Black History Month, the Arab American National Museum and The Secret Society of Twisted Storytellers will unite for the Feb. 1 installment of AANM’s Hikayat storytelling series. Professional and non-professional storytellers will share their freedom tales in this collaborative event, which also includes frequent AANM partner, ACCESS’ Campaign to Take on Hate.

The evening begins at 8 p.m. at the AANM, 13624 Michigan Ave. Tickets are $10 for AANM Members, $12 for students and seniors, and $15 for non-members. Tickets are available in advance at www.arabamericanmuseum.org/hikayat and at the door.

With coaching from Detroit storyteller Satori Shakoor – TSSOTS producer, curator and host – experienced and amateur storytellers will give live performances of compelling personal stories of freedom in its many forms. The audience for this special event will not only bear witness, they will be active participants in the storytelling process.
“I believe that listening is a revolutionary act,” Shakoor said. “Being in partnership with AANM to bring these storytellers and their stories to the world, is an expression of peace, service and activism.”
Scheduled storytellers for the Feb. 1 Hikayat include:

• Ali Al-Arithy, a Detroit resident who is working on a master’s degree in creative writing while employed as an elementary school teacher and reading interventionist.
• Mariam Noor of Detroit is a liberal arts major working on a master’s degree who is passionate about community building and organizing.
• Nicole Denson, a Detroit resident who directs advocacy services at the WC SAFE Program, among the most successful and largest stand-alone sexual assault program in Michigan.
• Shahad Atiya is an immigration and criminal defense attorney who was born in Baghdad, Iraq, and resides in Detroit. She was part of the cast of AANM’s original production in conjunction with Ping Chong & Co., Undesirable Elements: Dearborn in spring 2018.
• Tuyishime Claire Gasamagera is an Allen Park-based writer, genocide and AIDS survivor, and co-founder of Association of Refugees Immigrants and Survivors of Human Trafficking Engage.
• Satori Shakoor is a former Bride of Funkenstein, artist, storyteller and social entrepreneur who hosts The Moth Story Slam in Ann Arbor and WDET’s Twisted Storytellers podcast. Shakoor is the founder, producer, curator and host of The Secret Society of Twisted Storytellers and executive director of its parent non-profit, The Society for the Re-Institutionalization of Storytelling. In 2017, Shakoor was named a Kresge Literary Arts Fellow.

The evening will be further enhanced with live music by Leafar (aka Rafael Statin), a multi-instrumentalist, composer, producer and masterful creative improvisational performer from Detroit whose work is inspired by jazz icon John Coltrane.

Joining Leafar are drummer Djallo Djakate and bassist Josef Deas, both seasoned masters of their craft and ardent students of the full range of jazz history and beyond.

“We are honored to give Arab Americans and other communities a platform to share their stories,” Hikayat series founder Dave Serio said. “It’s impressive how relatable the storytellers’ experiences are, how they ring true with the audience regardless of their own background or experience. The level of emotion and vulnerability displayed around everyday topics is just beautiful.”