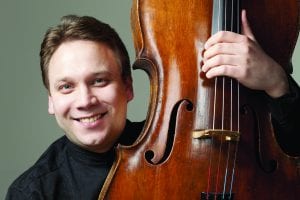 Under the direction of Atlanta Pops Orchestra conductor Jason Alteri, the Dearborn Symphony heads full steam into 2019 with its showcase of symphonic masterworks at 8 p.m. Feb. 15 at the Ford Community & Performing Arts Center.

The evening features cellist Dmitri Atapine, performing Tchaikovsky’s “Variations on a Rococo Theme,” a piece inspired by Wolfgang Mozart, one of Tchaikovsky’s favorite composers. Atapine has appeared on stages around the world, offering his “expressive sound – beauty, warmth, lyricism and deep sentiment.”

The program opens with Mozart’s effervescent “Overture to the Marriage of Figaro” and includes Debussy’s “Petite Suite” with exquisite melodies, festive tunes and beautiful dance rhythms and climaxes with Beethoven’s spirited “First Symphony” that heralded the dawn of a new musical era.

Alteri has been invited to guest conduct as part of the Dearborn Symphony’s search for a new music director and conductor after a 21-year tenure by Kypros Markou. The symphony board selected three finalists through a systematic process from an original group of 25 recommended conductors. Each conductor is leading one concert during this season.

Alteri’s program features the aforementioned orchestral masterworks; Steven Jarvi, a native of Michigan and resident in Ann Arbor, conducted in October for the Dearborn Symphony’s presentation of Russian masters; and Nick Palmer, who has been directing throughout the world since 2007, will appear as guest conductor for the May 3 concert, which will be the symphony’s final concert for this season and will feature works by Shostakovich, Sibelius, Rimsky-Korsakoff and Williams.

The Dearborn Symphony is reaching out to its audience to help select their permanent conductor. For each guest conductor appearance, patrons are asked to complete a survey, offered at the concert or online, to evaluate the performance. In this way, the symphony is creating community participation, and hopefully buy-in, for the new music director of the Dearborn Symphony.

Before the finale, the symphony’s annual pops concert March 29 with Rich Ridenour will feature a cast of Broadway stars singing hits from the three Sirs — Elton John, Paul McCartney and Andrew Lloyd Webber.

The Dearborn Symphony has partnered with local restaurants for “Dinner and a Concert.” The restaurants — Andiamo Dearborn, The Dearborn Inn, Mint 29, Tria at The Henry, and La Pita — offer a 20 percent discount to symphony ticket-holders on concert nights. Reservations are recommended.

Season sponsors include Ford Land and Dearborn Sausage Co. with additional support from The Dearborn Inn, the Michigan Council for the Arts and Cultural Affairs, the National Endowment for the Arts, and Kresge Foundation.