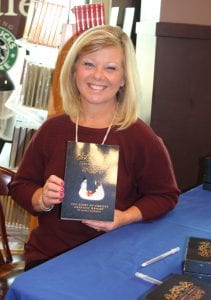 “Christ, With a Y,” Taylor resident Karen DePriest’s book about her late daughter, Christy DePriest Wright, is filled with stories about her which inspire others to continue her work.

DePriest signed copies of her book Oct. 5 at the Allen Park Barnes & Noble.

Wright, who died in 2010 of a rare cancer of the outer blood vessels, inspired her family to found the non-profit “Christy’s Legacy of Hope,” which helps vulnerable children, including orphans and those in foster care, worldwide.

DePriest said the book, released in August, took five years to write, and another year to edit.

Part of the healing process for DePriest was founding, in 2011, the non-profit Christy’s Legacy of Hope.

She said she knew after Christy died that she would write a book about her.

“It was super healing,” she said. “At the end, when I dotted the last sentence, I cried, because I felt like there was so much that I wanted to do, and the finality of the book being finished and her story being finished was hard.”

DePriest said she was a nervous wreck prior to the book-signing.

“I didn’t know what to expect,” she said. “And sitting here, and having the love of friends, and meeting new people, and getting to tell them the story is fun, healing and beneficial.”

DePriest said “Christ, With a Y,” will make readers laugh and cry.

“They will learn a lot about a young lady who was sensational,” she said. “She was quite inspirational to many people, and I think that my story will give people hope, even though Christy did pass away, it will give them hope and how to live their lives after they have lost somebody, especially through cancer.”

Wright’s childhood friend Renee LaBelle of Dearborn, who came to the book signing, said she was proud of what DePriest had accomplished by writing the book.

“It’s not easy to write about the life of your daughter after she is gone,” LaBelle said. “It’s emotional.”

LaBelle said Christy was a happy child, something which she seems to have carried into her adulthood. She said Christy remained positive up until the time of her death.

“They don’t let what they want to do for others die off before they do,” LaBelle said.

Jessica Brown of Allen Park, a Truman Taylor High School friend of Wright’s, said they were cheerleaders together.

“She was always super-compassionate about everything she did,” Brown said. “She was enthusiastic about people and the things that mattered. She didn’t sweat the small stuff.”

Brown said that despite the highs and lows of the story, it is going to leave readers with a feel-good moment.

“So, if you are looking for something to inspire you, what somebody can do after you have lost someone, I think it is a good book to read,” Brown said.

DePriest said the book sells for $24, which is Christy’s age when she died.

For more information about Christy’s Legacy of Hope, go to christyslegacyofhope.com.

To order “Christ, with a Y,” go to the Allen Park Barnes & Noble, 3120 Fairlane Drive, or order it online at amazon.com/Christ-Story-Christy-DePriest-Wright/dp/1543976158. All the proceeds support the non-profit Christy’s Legacy of Hope.