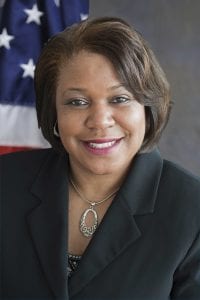 By ALICIA BELL
As the 2020 U.S. Census approaches, one point remains clear: Everyone must be counted.

That is especially true in Wayne County.

According the Southeast Michigan Council of Governments projections, Wayne County could lose as many as 80,000 people after next year’s census. Detroit, now a city of about 715,000, could see its population fall below 650,000.

While census figures could indicate that some Detroit residents have moved to other Wayne County communities, population loss isn’t just a “big city” issue.

Some smaller Wayne County communities could lose 5 percent or more of their population. While their raw numbers may be less than those of Detroit, the impact is just as devastating.

Fewer people means less federal money for important projects. Projects that could improve our roads, bridges and highways could be eliminated or severely cut back.

It is not just about money. Population loss also could translate to the redistricting of seats in Congress and in Lansing, diminishing the influence of Wayne County, metro Detroit and Michigan as a whole.

That is why everyone affiliated with the Wayne United 2020 Census project is working diligently to make sure everybody takes part in next year’s census and is counted.

We must especially make certain that members of our county’s vast immigrant population are accurately counted. In Wayne County, we are justifiably proud of having the most diverse population in the state.

Over the last decade or so, we have experienced a great influx of new residents from the Middle East, India, China, Bosnia and Herzegovina and many other countries and regions. We see diversity in all of our 43 communities. For instance, north Detroit is home to a burgeoning Bengali population, while our county’s Latino population is growing and moving. Latino Americans represent more than 18 percent of the population of Melvindale and nearly 15 percent of all Allen Park residents.

It is clear that the number of our county’s Arab American residents is also growing – and not just in Dearborn.

A drive down Conant or West Warren in Detroit provides a close-up view of flourishing Lebanese American and Yemeni American communities in those areas.

Wayne County communities are also becoming more racially diverse. African Americans make up more than 15 percent of the population in such communities as Westland, Taylor and Redford Township.

But barriers remain, especially regarding language and trust in local governments. These barriers pose a threat that immigrant Americans will be undercounted in the 2020 census.

Consider Hamtramck, where at least 16 different languages are spoken by local school students and where nearly two-thirds of students come from households where English is the second language spoken – if at all. In the suburban Plymouth-Canton district, more than 1,000 students are also English learners.

With so much diversity, how can we break down language and trust barriers to make sure everyone is counted?

The answer is build trust by reaching out to immigrant Americans in their own languages.

Thankfully, much is already being done in Wayne County by various government agencies to address both.

For example, the Wayne County Commission published its new Citizen’s Guide to Wayne County Government in Spanish and Arabic. This is a small, but significant, step that will help build trust with our new citizens and show them that we respect their customs and cultures.

It is not just about the census. Reaching out to our county’s new arrivals and assuring their full participation in our communities, allows all of us to tap into the rich heritage they provide.

Yet, too much is at stake for all of us to let anyone not be counted in the 2020 census.

(Alisha Bell [D-Detroit] is chairwoman of the Wayne County Commission.)