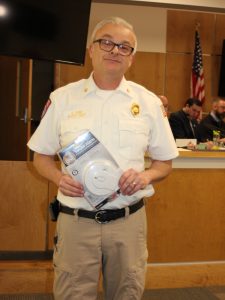 The $2,500 grant award, for which Fire Chief Doug LaFond applied, is from the Factory Mutual Insurance Co., and will provide the city with 175 smoke detectors, purchased at a discounted price arranged through Home Depot, to distribute to residents.

Cann said the detectors come with 10-year lithium ion batteries, which last for the life of the detector. He said that while they will be distributed at the Roosevelt Street station during the day to any Allen Park resident with identification, the Fire Department prefers to distribute the units to senior citizens and those who might otherwise not be able to afford the lifesaving devices. He said there will be a limit of two detectors per household.

Cann said smoke detectors have made a significant difference at recent fires within the city.

“We had a 16-year-old girl fall asleep when frying food on the stove,” he said. “The smoke detector woke her up, she extinguished the fire and called the Fire Department to complete the job.”

He said another resident’s life was likely saved by a smoke detector, as well.

“We had a 60-year-old woman who was having a glass of wine at about midnight, and there was a fire in her garage, from a cord that was under a rug, in an attached condominium that was not sprinkled,” Cann said. “Her smoke detector woke her, the Fire Department responded after she left the house and we extinguished the fire.”

He said in October, a sadder outcome occurred.

“We had a gentleman who had been cooking with oil, and accidentally left the stove on, and went upstairs,” Cann said. “He suffered life-threatening injuries and unfortunately perished. His smoke detectors were not installed properly.”

He said the state of Michigan leads in fire deaths in the nation.

“We are up now, 30 percent, from last year, from fire deaths,” Cann said. “Smoke detectors save lives, and every home should have them.”

“They simply wear out, and should be replaced,” Cann said.

He said the Building Department is working to get similar smoke detectors installed in rental units.