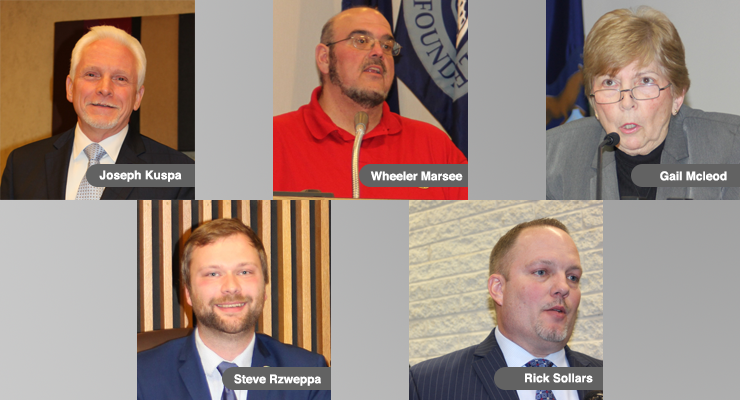 As concerns about the spread of the coronavirus continue, public officials in cities throughout Downriver are canceling events and taking measures to help prevent the spread of COVID-19.

Gov. Gretchen Whitmer ordered the cancellation of all events and shared space assemblages with 250 people or more through April 15.

Lincoln Park Mayor Thomas Karnes said the city is going to take precautions, and said he would supply more updates as they became available.

Former Lincoln Park City Councilman Chris Dardzinski said the Hands of the City group will hold an emergency meeting at 5 p.m. March 15 at Lincoln Towne, 1582 Fort St., Lincoln Park, to decide whether to continue or cancel the upcoming All Day Jam, the Memorial Day Parade, and the Downriver Comic and Collectors Show, which will also be subject to a decision by the Lincoln Park Public Schools.

Dardzinski wants the decision to be based on group input, as well as a vote, and urges the involved volunteers to attend the meeting.

Melvindale Mayor Wheeler Marsee, who said he woke up Friday to hear of the governor’s closing of schools statewide, said that for now, city business will continue as usual.

“Informational fliers from the state have been posted, informing personnel of the warning signs and prevention,” Marsee said. “We will have to see what other measures need to be taken going forward.”

He said he was aware of no meeting cancelations, but said that can be modified as conditions changes.

Trenton Mayor Steven Rzeppa said the March 15 city council meeting has been postponed until March 30, and all functions at the Kennedy Recreation Center, Westfield Center and Trenton Memorial Library will be postponed for at least two weeks.

“Because of the vulnerability of seniors to COVID-19, large public gatherings are being strongly discouraged,” Rzeppa said. “The situation is changing rapidly, and we receive more information every hour.”

He said the safety and health of city employees and all residents is a top priority, and even if COVID-19 isn’t a worry to an individual, they should consider their responsibilities to others.

“Realistically, being in my late 20s, if I contracted it, I would probably be just fine,” he said. “But it’s not about me. I think a lot about my grandmas, at 89 and 88, and even my parents and other relatives that aren’t necessarily old, but aren’t as fortunate to have our great health or youth.”

Rzeppa urged others to be conscious of the elderly, and those with auto-immune disorders, whom he said are most vulnerable, and need to be checked on.

“We will all get through this together,” he said.

Taylor officials are urging residents to take measures to prevent transmission of the coronavirus.

“The health of our residents is of the utmost concern at this time,” Taylor Mayor Rick Sollars said. “This is a serious health concern. We are doing our best to deep clean our buildings as much as possible, and in some cases, closing them for a period of time.”

He urged residents to stay home and avoid contact with others if ill, cough into their arm, avoid touching their face, and to wash to their hands.

“Hoarding supplies and food are not necessary,” he said.

Taylor officials urge residents to use the drop box outside of city hall, on Pine Street, to pay bills, and to conduct city business by phone and email, instead of in person, until the outbreak is over.

Taylor is suspending school tours of city hall. City council meetings, by law, will remain on schedule, and open to the public.

The Taylor Community Library has suspended most events next week, and the Heritage Park Petting Farm is closed until March 20, with scheduled birthday parties continuing as scheduled unless residents wish to reschedule.

The March 20 indoor market at The Lakes of Taylor has been canceled, but the Martini Tasting event at the Lake House Grill will go on as scheduled.

In Allen Park, Mayor Gail McLeod said city officials are taking every precaution recommended by county, state and federal agencies, and has posted updates on the city’s website and the city’s Facebook page.

“We have taken additional steps, recommended by our emergency coordinators at the Fire Department, to ensure the safety and well-being of our employees and residents, and will continue to communicate with all of them any and all steps necessary to prevent illness,” she said.

McLeod said that while the government cannot shut down, they will take steps to function and provide services while simultaneously taking steps to avoid spreading COVID-19.

“To that end, while we will hold our regular city council meeting next Tuesday, we are asking residents, including students, to not attend, and only department heads with something on the agenda will be in attendance,” she said. “In addition, we have posted notices on all City Hall doors asking that residents do not come in if they are sick, or have been in contact in the last 14 days with someone who is sick with cold or flu symptoms, even if they are not symptomatic at this time.”

McLeod said residents are encouraged to leave payments to the city in a drop box in the parking lot. She said city officials will continue to monitor the situation and will heed all government directives to help prevent the spread of the virus.

Southgate Mayor Joseph Kuspa said the city has posted key information on the city website to help residents, at southgatemi.org/residents/coronavirus_information___updates.php.

“We are certainly living through some challenging times,” Kuspa said. “Our collective effort to contain the spread of this virus is a very serious matter.”

The Wayne County COVID-19 Virus Hotline is 734-287-7870, with website updates at waynecounty.com/departments/hhvs/wellness/novel-coronavirus-information.aspx.