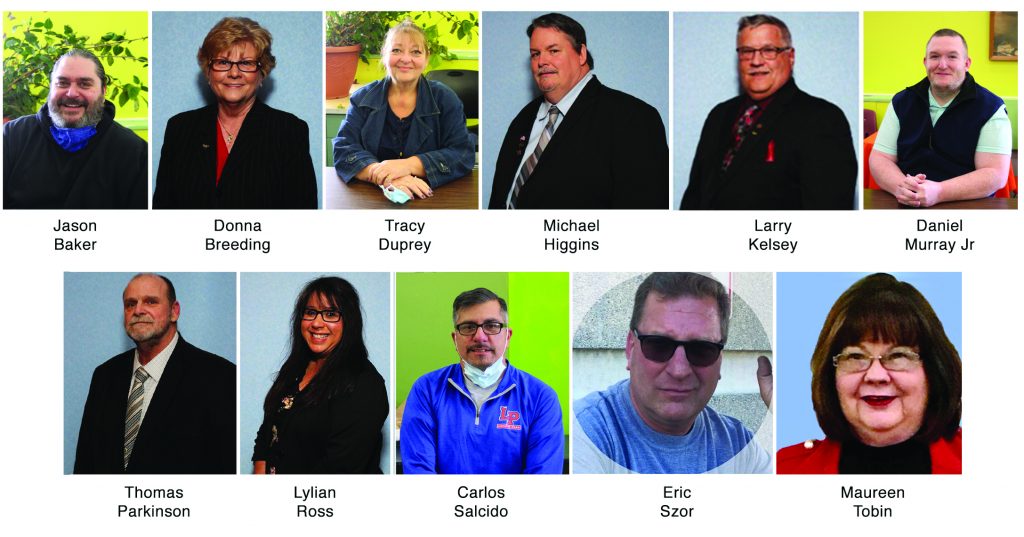 LINCOLN PARK – Five newcomers are challenging six incumbents Nov. 3 for one of six positions on the City Council.

Incumbents Breeding, Higgins, Parkinson and Ross did not reply to questions posed by the Downriver Sunday Times by deadline.

Baker, a lifelong resident, is a third-generation Lincoln Parker. He works as a nurse practitioner in internal medicine, and is currently pursuing his doctorate in a related field.

He said his run for city council was inspired by his love for the city.

“I believe we can see major improvements, but it will take individuals that want to be part of the solution,” Baker said. “I am ready to work as a team member to help improve our city.”

He said his top priorities are bringing in new businesses, addressing the road concerns and decreasing crime.

“These problems are not unique to Lincoln Park,” he said. “These are the same issues faced by most cities. The real problem is how we go about getting them fixed.”

He said solving problems as a team can help overcome red tape and political drama.

“Electing candidates who are resourceful, out-of-the-box thinkers and who have a vision for a better city will bring a new perspective and new ideas to the table,” Baker said.

Breeding, who retired after working 46 years for the city of Lincoln Park, served as its city clerk for 25 of those years. She said she learned first-hand of the city’s priorities, which include improving its roads and the condition of its neighborhoods.

Duprey, who has owned houses in Lincoln Park since 1999, has lived in the city for six years. She is a retired information technology business manager for the Ford Motor Co.

She also is a minister, established a food pantry in Lincoln Park in October at Chandler Center, and is a long-time city volunteer.

Duprey said she is running for city council to improve the shape of the city.

“My decision was sealed when marijuana was voted in by the citizens, but voted out by the council,” she said. “That was an injustice, and I was part of the team to get the petition and signatures to get it back on the ballot, to pass yet again, and now the ordinance is passed, and we are ready to accept license applications.”

Duprey believes that the City Council needs to be more transparent and to communicate better with residents.

She said her top three priorities are bringing more revenue into the city by making the city more business friendly, addressing the needs of the city’s infrastructure and sewers, and focusing on roads and public safety.

Duprey would like to see Lincoln Park work with nearby cities to apply for grants, as well as state and federal funds, to address its aging infrastructure concerns.

She also would like to see stepped up police patrols to address stop sign runners and petty theft in neighborhoods.

As an animal activist, she said she also would be an advocate for improvement of the current city animal shelter.

Higgins, a third-generation Lincoln Parker, has been on the council since 2003, serving four terms. An employee of the Lincoln Park Public Schools, he served as the Lincoln Park High School swim coach for more than 30 years. His priorities include the city’s roads, sewers, infrastructure and park maintenance, as well as attracting new businesses to empty buildings and lots.

Kelsey, who has served on the City Council for the past six years, is an LPHS graduate and an Army veteran, who worked for the Ford Motor Co. for 38 years, serving as a local UAW union president.

Kelsey, who volunteered with the Community Emergency Response Team and the Citizen Watch Patrol, initially ran for a council seat to better help residents resolve issues with the city.

“I believe we can encourage people with higher incomes to set roots in Lincoln Park to raise their families, and to encourage more businesses to come to a city that is on the move,” he said.

“These are difficult challenges,” he said. “However, with patience, I believe we can get this done.”

Murray, who has lived in Lincoln Park for 11 years, has an associate’s degree in criminal justice and works in security. He is also a corporal in the Taylor Auxiliary Police Department, and is a member of the Fraternal Order of Police Lodge 123.

He said he is running for a city council position to bring new faces and fresh minds to the body, who are willing to change the culture of the city to better reflect its residents.

“We need council members who are willing to listen to the residents and fight for what they want, instead of voting based on their own opinions and beliefs,” Murray said. “I want to be a part of that culture change, and to help bring Lincoln Park into its next chapter.”

He said his top priorities are resident safety, the city’s aging infrastructure, and increasing the city’s tax base by bringing more businesses into the city.

“Being an auxiliary police officer, I am aware of the volunteer efforts that we can bring to our community to help support our paid police officers,” Murray said.

He said road and sewer repairs are needed to help prevent resident vehicle and house damage, and said county and state money should help support mandates from higher levels of government.

He said the city will become more business-friendly when the building department becomes more amenable to welcoming new businesses.

“With safety and infrastructure improvements, businesses will start looking at Lincoln Park as an up-and-coming community,” he said. “We will need to correct the issues with our building department, to welcome businesses and work with them, instead of against them.”

Murray said he also would like to see the animal shelter finished properly, and in a timely manner.

Parkinson, who has served on the City Council since 2016, is a lifelong resident and a retired foreman of the Department of Public Services. His priorities include the city’s roads, citywide cleanup, and the attraction of new businesses and residents.

Ross, who was elected to the City Council in a special election on May 8, 2018, to fill the vacancy left by the death of Councilman Mario DiSanto, was re-elected to a new term later that year. Her priorities include the city’s finances, aging infrastructure, roads and blight.

Salcido, who has served two years on the City Council, has lived in Lincoln Park for 53 years. He works for the Ford Motor Co., and is UAW Local 3000 vice president.

His said during his first term as a councilman, he learned a lot while helping residents address their concerns, and he would like to continue to be their voice on the council.

He said he would like to focus on the creation of a dog park within the city, focus on the sidewalk improvement program and promote the city as a great place to establish a business and live.

He works for the Ford Motor Co., and is an officer with the 25th District Court in Lincoln Park. He is also a community service program supervisor.

“I have always been very passionate about serving Lincoln Park and helping the community,” he said. “I am a proud Rail Splitter.”

Tobin, a 20-year resident of the city, works for the city’s recreation department as an event coordinator.

She also is an active member of the Exchange Club, and is currently the group’s president. She also volunteers with a group which works to end homelessness among veterans.

Tobin said, as a city employee, she has learned much about the workings of the city, and has learned about what needs to be done to revitalize the city.

She said her priorities include revitalizing the downtown, treating businesses with more respect, and improving roads and infrastructure while finding ways to alleviate flooding.

She said older buildings need to be revamped to attract new business, and the city needs better parking areas, side streets and safe sidewalks.

Tobin would like to see the city hire a full-time grant writer, to bring funding into the city.

She said she also would like the city to hold the Michigan Department of Transportation and the Wayne County Road Commission accountable for its roads within the city.

In addition, Tobin would like to see improvements to Ecorse Creek to better accommodate heavy rains and to prevent backflow into basements.

“I am running because I see the need and know how to start revitalizing our city,” she said.