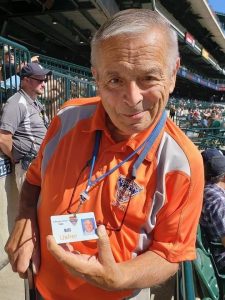 DEARBORN — Known to many as “Foul Ball Billy,” longtime Detroit Tigers usher William Fundaro died Oct. 25 at the age of 77.

Fundaro grew up in Dearborn where he attended St. Alphonsus-St. Clement Parish and taught for several years.

He attended Marquette University earning his bachelor’s degree in 1965 before starting his career in education at St. Anne in Detroit and then St. Mary’s in Redford.
From 1970 to 1981, Fundaro was a counselor and teacher at Riverside High School, then a counselor at Clara B. Ford Academy from 1986 to 1998, and a teacher at Fordson High School from 1998 to 2011.

Fans at Tigers games at Tiger Stadium and Comerica Park recognized Fundaro’s familiar face as his job as an usher for 51 years. He started in 1968 and worked his last year in 2019. Due to the COVID-19 pandemic, no fans were allowed to attend baseball games during the shorted 60-game 2020 season.

Two years ago, the Tigers honored Fundaro for his 50 years with the organization before a game against the Chicago White Sox where he threw out the first pitch.

The Tigers posted the video of Fundaro from 2018 alongside the message, “The Tigers are saddened to hear of the passing of longtime usher Bill Fundaro and extend our heartfelt condolences to his family. Known as ‘Foul Ball Billy,’ he was a friend to generations of Tigers fans.”

Anyone who attended Tigers’ games could see Fundaro in section 131-132 at Comerica Park awaiting them with a smile and ready for a conversation.

Stories and photos of encounters with Fundaro flooded social media with some detailing that Fundaro would allow fans to sneak down to closer seats during lopsided games.
Comments filled the Tigers’ Facebook video post.

“Mr. Fundaro will be missed.. he was a teacher at our high school, Riverside in Dearborn Heights, if the stadium wasn’t packed he liked to help us get a better view of the game,” Dale Marie Sciberras wrote.

“Was always my favorite usher. He was always smiling,” Cathy Alcala wrote.

“I am so sorry to hear of Bill’s passing,” Michael Weisserman wrote on Facebook. “He was a nice man. I’d shake his hand upon arrival every game. He was so proud to have been honored by the ballclub last year for his 50th anniversary with the team. Section 132 will never be the same again. Rest In Peace, Bill. There will be plenty of ballgames to watch where you’re going.”

In lieu of flowers, the family suggests memorial donations to The Capuchin Soup Kitchen.