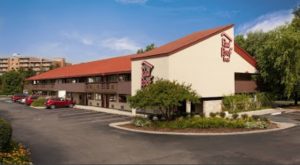 MELVINDALE — A man who taunted another guest in the lobby of the Red Roof Inn, 17600 Dix Road, the night of Feb. 6, was arrested after his intended victim held him down until police officers arrived.

A desk clerk said the victim was in the lobby when the aggressor entered and began taunting and chasing the victim, trying to hit him. When police officers arrived, the victim, who had been restraining the assailant, had a cut on his forehead, but declined medical attention.

The perpetrator was arrested for assault and battery, searched, handcuffed and taken to the Dearborn police station, where he was booked and held.