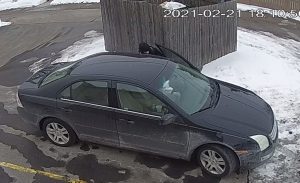 WYANDOTTE — A pizza delivery worker who left his vehicle running the afternoon of Feb. 21 while he ran into Hungry Howie’s, 1534 Ford Ave., to pick up an order, had his vehicle and wallet stolen by an opportunistic thief.

The thief fled north on 16th Street in the 2006 black Ford Fusion.

Deputy Police Chief Archie Hamilton said the thief took the worker’s source of income, and said police detectives are checking nearby surveillance cameras in an attempt to identify the perpetrator.

Anyone with information about the location of the stolen vehicle are asked to call the Wyandotte Police Department at 734-324-4434.