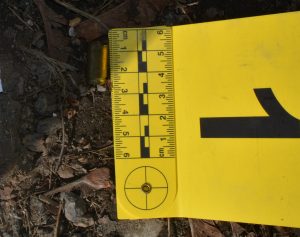 WYANDOTTE — Gunfire erupted in the 1800 block of 7th Street the afternoon of March 7, and while no one would talk or press charges, Deputy Police Chief Archie Hamilton said the matter was far from over.

Police officers who responded to a domestic dispute discovered two women in the driveway next to a damaged vehicle, with one of the women firing rounds in the direction of the house before both fled in a silver Ford Escape.

Those inside the house did not cooperate with the police investigation, but physical evidence suggested that several 9-millimeter rounds were fired into the air or the ground.

“Our agency will not tolerate this type of dangerous behavior,” Hamilton said. “This person endangered the lives of everyone on that block, and we intend to hold her responsible for those actions.”