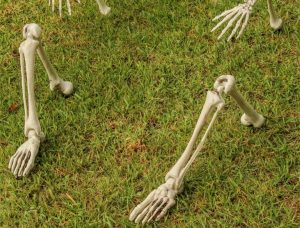 SOUTHGATE — Suspicious bones found in the backyard of a house in the 12000 block of Ward Street prompted a resident to take them to the Southgate police station April 22, fearing that they might be of human origin.

The resident said he discovered the bones when he was cutting the grass.

A police detective took photos of the bone fragments and forwarded the images to a Michigan State Police human remains analyst, who offered the reassuring news that they were not human.