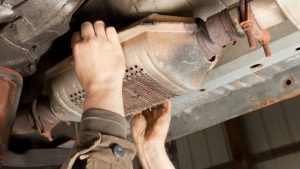 TAYLOR — A woman who was awoken at 1:30 a.m. June 3 by the sound of reciprocating saw investigated, and subsequently yelled at the person stealing the catalytic converter from underneath her husband’s 2008 Ford Escape.

The theft occurred in the 15000 block of Westlake Avenue. The thief was described as being between 5 feet 5 inches to 6 feet tall, with an average build, and wearing a black sweatshirt with the hood pulled up, who fled in a dark colored sport utility vehicle.

Police officers canvassed the area, but were unable to locate the suspect or vehicle.