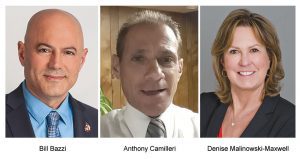 HEIGHTS — Voters in Dearborn Heights Aug. 3 decided the two mayoral candidates who will be on the general election ballot for the partial and full terms.

Current Mayor Bill Bazzi and City Council Chairwoman Denise Malinowski-Maxwell received the most votes during the primary election with 4,004 and 1,570, respectively, in the partial race. The third candidate, Anthony Camilleri finished with 562 votes.

Winner of the partial term seat will serve upon certification of the Nov. 2 election until Dec. 31, the remainder of late Mayor Daniel Paletko’s term. The full term would be from Jan. 1, 2022 through Dec. 31, 2025.

Dearborn Heights as a city had a 14.62 percent voter turnout, according to the unofficial results from the Wayne County website. A total of 6,382 of 44,762 voters cast their ballots.