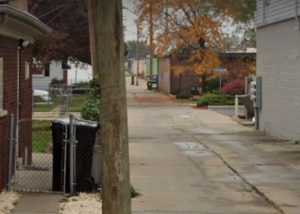 WYANDOTTE — An angry 28-year-old Wyandotte man was ticketed the afternoon of July 26, in the 1300 block of Ford Avenue, for violating the city’s alley ordinance, after he angrily goaded a police office into writing him a citation.

Since alleys are often used as escape routes for home invasions, garage burglaries and other thefts, alley use in the city is regulated to lessen criminal activity.

When the police officer asked the man why he was in the alley, he became angry, swore at the officer, and was uncooperative. He reluctantly produced his identification, after which he was ticketed, which prompted another round of profanity while he ripped up the ticket in front of the officer. It is unknown whether he was cited for littering.