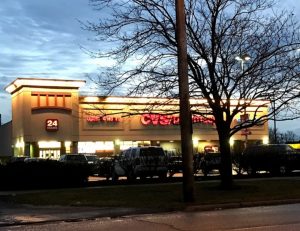 WYANDOTTE — A 53-year-old Lincoln Park man who stole several bottles of liquor from CVS Pharmacy, 2025 Fort St., the morning of Aug. 13 was arrested by Police Chief Brian Zaleski, who spotted the suspect waiting for a ride at a nearby bus stop.

Zaleski, knowing that shoplifters often use mass transit to make a quick escape, searched nearby bus stops, and spotted the man in the processing of shedding the camouflage T-shirt he was described as wearing when he was shoplifting.

The man also tried to hide the red bag he filled with stolen merchandise inside a tan bag he was carrying.

Confronted with the evidence, the man confessed, and was placed under arrest.

Deputy Police Chief Archie Hamilton said the shoplifter had a good plan: He changed shirts, concealed his bag inside one of another color, and attempted to leave the area by bus.

“His planning could not outplay the 30 years of law enforcement experience the chief possesses,” Hamilton said. “In the end, the career law man outwitted the career criminal.”