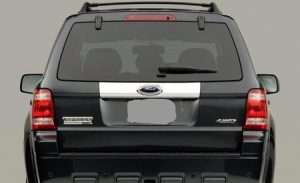 RIVERVIEW — The rear lift gate rear window mechanism of a 2008 Ford Escape was reported broken Feb. 22 in an unsuccessful break-in attempt while it was parked Ryanwood Drive south of Fox Glenn Drive.

The victim said the broken mechanism also incapacitated the rear windshield wiper and the window latch.

Police officers found no visible pry marks, and nothing was missing from the vehicle. There were no suspects, and no nearby surveillance cameras.