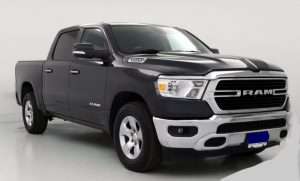 MELVINDALE — A convicted felon with prior weapon and drug offenses was taken into custody Feb. 15 and charged with fleeing and eluding, obstructing police, a concealed carry weapon violation, being a felon in possession of a firearm, possession of a firearm during the commission of a felony, no vehicle insurance and an improperly displayed vehicle plate after he attempted to flee a traffic stop with marijuana and a handgun in the vehicle.

A police officer driving behind the black 2019 Dodge Ram pickup on Outer Drive near Gale Boulevard noticed that the vehicle had a damaged windshield and a non-functioning passenger side rear light, as well as two license plates – one on the bumper, and a paper plate obscured by the tinted window.

After running the plate, the police officer determined that the vehicle was uninsured, so a traffic stop was initiated. The man, who said he didn’t have vehicle insurance due to a cash flow situation, turned off the vehicle but refused to surrender his key fob. He also declined to identify the contents of a black hard shell plastic case on the front passenger seat.

The man continued to refuse to surrender the vehicle keys, and he refused to step out of the vehicle. The police officer then called for backup and requested a tow truck.

The driver continued to ignore the police officer’s commands, and sped away from the traffic stop. However, he was headed off by another police officer responding to the scene, who then conducted a felony stop, ordering the man to exit the vehicle, drop his keys and wallet, and walk backward toward the police officers and then lower himself to the ground, where he was handcuffed and taken into custody.

A vehicle inventory search revealed seven large bags of marijuana, as well as small bags, sandwich bags, scissors and a scale in the hard case on the front seat, and bags of wax marijuana on the back seat.

The man also had a handgun registered to a Grand Rapids man, and did not possess a concealed pistol license.