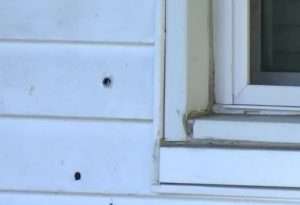 MELVINDALE — Multiple bullets were shot at a house in the 19000 block of Wall Street about 4 a.m. March 2 by an unknown gunman, whose image was captured on surveillance camera footage.

The house has been shot at in the past, the residents said.

One of the victims, a woman, who was awake at the time, said their home surveillance cameras recorded the image of a black male wearing black jeans, a blue hoodie and a black ski mask as he approached the exterior of the house on foot, then shot at least six rounds at the house before running to his car and leaving the scene.

The getaway vehicle, which was parked on Palmer Street, was driven toward Outer Drive.

There were six bullet holes in the dining room window. Five shell casings were found on the driveway. Two projectiles were found inside, on the floor near the kitchen table and in the laundry sink.

The five spent casing were taken to the Detroit Police Department’s National Integrated Ballistic Information Network division, but no match was found in the nationwide database.

On March 3, police officers returned to the house to investigate the damage and to collect the bullets that were lodged in the interior walls of the house.

Neighboring residential Ring doorbell cameras only save footage for 24 hours, but police officers continued to seek footage from nearby businesses, including a gas station, in the hope of obtaining additional surveillance camera footage.