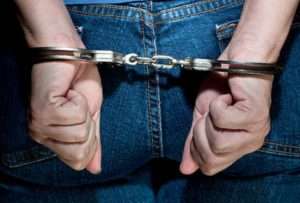 WYANDOTTE — A woman was recently arrested as the aggressor in a domestic violence situation, in which her male partner and victim reported that she was physically assaulting him.

The woman subsequently resisted arrest, and had to be pepper-sprayed before she could be handcuffed and placed in a patrol car. She also spit on two of the police officers, making a bad situation worse.