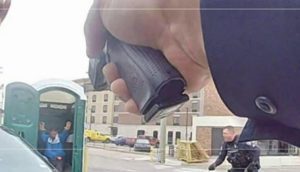 DEARBORN — A bank robber was tracked down hiding in a portable toilet March 2 after allegedly robbing Dearborn Federal Savings Bank, 22315 Michigan Ave., according to a story reported by WDIV.

The man reportedly passed a note to a bank teller demanding small bills, no dye packs and no GPS sensors, and indicated that he had a gun and would kill people if she raised the alarm.

Surveillance camera footage and a K-9 officer helped locate the man’s hiding location and his bag, which was filled with $1,690 in small bills.