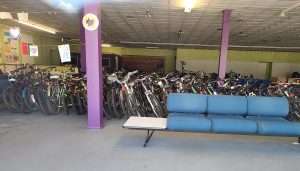 LINCOLN PARK — A truck full of refurbished bikes destined for students at a Detroit middle school, along with the 16-foot truck in which they were stored, was reported stolen the morning of March 22 from the non-profit group Programs to Educate All Cyclists, housed in the former Al Petri Bicycle Shop, 2160 Fort St., as reported by WDIV Channel 4.

A spokesperson for the group, which helps provide bicycles for those in need, said they are disappointed that students with disabilities may be losing the opportunity to have a bicycle to ride during the summer months.

The non-profit’s program is also jeopardized by the loss of its truck, which limits its community outreach.

Anyone with information about the missing bicycles and truck are urged to contact the Lincoln Park Police Department.