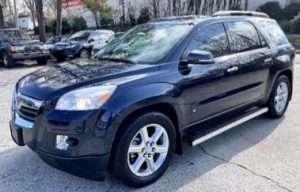 MELVINDALE — A 51-year-old Melvindale woman was arrested March 12 when it was discovered that the 2008 dark blue Saturn Outlook she was driving was reported stolen from Gaylord.

The woman, who said the vehicle belonged to her cousin, was not able to provide proof of insurance, and she did not have a driver’s license, which was later found to be suspended.

The woman had active arrest warrants with the Michigan State Police, so she was taken to the Dearborn police station, where she was booked and held.