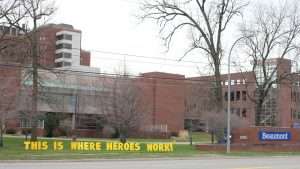 MELVINDALE — A woman who was found sleeping on a couch on the front porch of a house in the 18600 block of Ruth Avenue the morning of March 7 was returned to Beaumont Hospital, Dearborn, from which she said she had recently been discharged.

The woman said she was cold, tired and lost. Fire department personnel who checked her out prior to transport said her vital signs were normal.